Summary: Gains for stocks and bonds

Despite ongoing global growth and inflation concerns, volatility – particularly for stocks – eased in July. US equities rose by over 9%, driven by a big surge in ‘growth’ technology-like stocks. Geopolitical concerns persisted: a promising grain export deal was overshadowed by a Russian port attack; while reduced gas supplies through Nord Stream 1 were curtailed even further (European natural gas prices jumped to fresh highs). In other commodity markets, Brent Crude still fell by 4.2% to $110/bl in July, while some industrial metals continued to struggle: copper was down 3.9%. Gold only fell by 2.3%, but briefly dipped below $1700/oz.

The US economy entered a technical (though modest) recession during the second quarter, as real GDP fell by 0.2% (non-annualised). Growth concerns pushed the benchmark 10-year Treasury yield lower to 2.65%: the gap with the 2-year yield inverted (again) to its lowest reading since 2000. The Fed continued its hiking cycle, raising its main policy rate by another 75bps to 2.25%-2.5%, after the headline inflation rate reached another multi-decade high of 9.1% (y/y) in June. On Capitol Hill, the Inflation Reduction Act of 2022 – focusing on tax, energy and climate change – appears to have gained momentum, ahead of November’s midterm elections. Earnings season commenced, with three quarters of companies ahead of EPS expectations (as of 29 July).

The euro area’s economy expanded by 0.7% in the previous quarter, though the timelier Composite PMI fell into contraction territory in July. Inflation continued to hit fresh highs in the eurozone (8.9%), UK (9.4%) and Switzerland (3.4%). The ECB raised its deposit rate by a larger-than-expected 50bps to 0%, its first hike since 2011. It also unveiled its ‘Transmission Protection Instrument’ (TPI) designed to prevent peripheral borrowing costs from widening. The euro briefly fell below parity against the US dollar – before partially reversing – and the 10-year Italian-German government bond (BTP-bund) spread touched 240bps, almost surpassing its June high. Mario Draghi resigned as Italian PM (early election in late September), while mounting political pressure forced Boris Johnson to announce his departure as UK PM (from early September).

Chinese equities underperformed this month: the CSI 300 and Hang Seng were down by 6.3% and 7.3%, respectively. Housing market fears were back in focus, amid mortgage protests and property developer default concerns. In response, Beijing announced it would mobilise $148bn of loans for stalled property developments: banks will use loans from the PBoC to refinance real estate projects. Covid cases also rose to their highest level since May. In Japan, former Prime Minister Shinzo Abe was tragically assassinated. 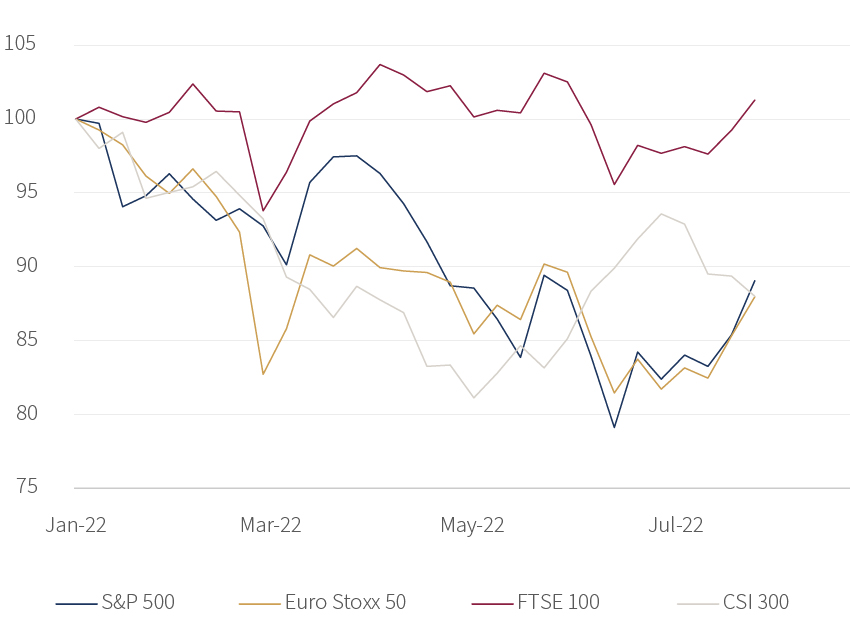