Risk appetite improved following a weaker-than-anticipated US inflation print, buoying expectations that the US Federal Reserve might slow – or even end – its tightening cycle. Several currencies rebounded against the US dollar – the euro rose above parity again, while the pound sterling breached the 1.20 mark. Commodities were mixed: Brent Crude and WTI oil fell to $85 and $80 per barrel (respectively), though gold rose by 8% (in USD terms). European natural gas prices also jumped higher but were still well below their summer highs. Elsewhere, cryptocurrencies suffered dearly after FTX filed for bankruptcy – Bitcoin fell by almost 20%. Finally, US companies reported an earnings growth rate of 2.2% in Q3, helped by strong figures from the energy sector (based on 94% of S&P 500 companies).

US hard data continued to look robust, though the soft data were more mixed: for instance, the closely-watched US ISM Manufacturing PMI contracted modestly to 49.0 in November. Labour markets appeared healthy: the unemployment rate edged up to 3.7%, still low by historical standards. The US CPI surprised to the downside in October: the headline rate fell to 7.7% (from 8.2%, y/y), while core CPI edged down to 6.3%. The Fed raised its target rate by 75bps – for the fourth consecutive time – to 3.75-4.0%. Importantly, there was no talk of a policy pivot: Powell signalled rates could end up higher than previously anticipated, though future hikes could also be smaller in magnitude. In the midterm elections, the Republican clean sweep failed to materialise as the Democrats retained control of the Senate, but ceded control of the House.

The euro area composite PMI – though modestly contractionary – was better than expected, edging higher in November. Moreover, eurozone headline CPI may have peaked in November, as it moved down to 10.0% (from 10.6%, y/y). Somewhat lagged, UK headline inflation rose to 11.1% (in October), though this was due to the latest uplift to the energy price cap. The Bank of England raised its base rate by 75bps to 3.0% but still appeared hesitant, after forecasting a weak domestic growth outlook, though Bailey indicated that further rate increases would occur. The eagerly-awaited UK Autumn Statement revealed near-term fiscal loosening – largely due to the government’s energy price cap support – with tax-raising measures more progressive.

Rumours that Beijing was outlining a roadmap for removing its strict covid measures prompted a sharp market response: the Hang Seng Index surged over a quarter in November – more than unwinding October’s losses (local currency terms). But a surge in covid cases, renewed localised lockdowns and nationwide protests complicated China’s re-opening process. Separately, Xi and Biden held their first in-person meeting at the G20 summit, in which they agreed to resume cooperation in key areas despite their strategic rivalry and ongoing tensions over Taiwan. In Japan, inflationary pressures continued to ramp up: headline CPI rose to 3.7%, the highest rate since the sales tax hike in 2014. 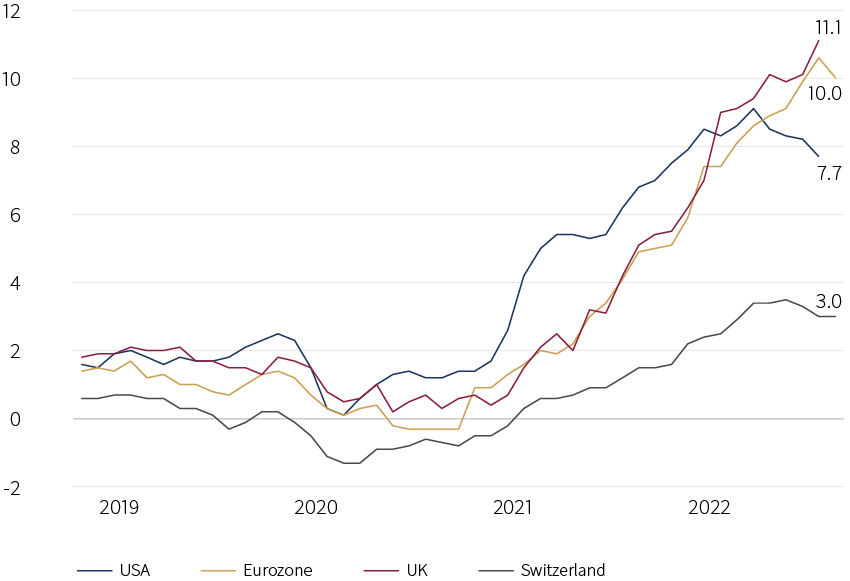