Summary: Another difficult month for stocks and bonds

Volatility remained elevated across stocks and bonds as global growth concerns mounted, alongside ongoing inflation risks. Policy rates continued to climb as central bank rhetoric turned even more hawkish. Geopolitical tensions remained elevated as the war in Ukraine continued; NATO boosted the number of troops on ‘high alert’, while Turkey dropped its opposition to Finland and Sweden joining the organisation. In other markets, commodities retreated this month: Brent Crude fell 6.5% to $115/bl, and industrial metal prices dropped – copper, for example, was down over 12% in June. The cryptocurrency rout also continued as bitcoin fell below $20,000.

The benchmark 10-year Treasury yield almost breached 3.5% in June, before moderating closer to 3%. Implied bond market volatility was elevated: the MOVE Index briefly jumped to its highest level since the initial pandemic downturn. The headline inflation rate unexpectedly rose to a new 40-year high of 8.6% (y/y) in May, as energy and food prices reaccelerated. The unemployment rate was unchanged at 3.6%, while the Atlanta Fed’s median wage tracker edged higher to 6.1%. As expected, the Fed raised its main policy rate by 75bps to 1.50-1.75%, with further tightening expected this year. In its latest Summary of Economic Projections, the median dot jumped to 3.375% for this year and 3.75% for 2023. Activity looked mixed: the ISM reading dropped to 53.0 in June (an expansion at a slower pace), but new orders contracted for the first time in two years.

The annual inflation rate in the eurozone rose to a new high of 8.6% in June. Euro area bonds were also volatile. The benchmark 10-year Italian BTP yield briefly breached 4%, while the spread against the 10-year German bund yield almost hit 250bps, the highest since May 2020. The ECB signalled its first rate hike would occur in July, followed by a potentially larger hike in September. It also unveiled its new anti-fragmentation tool, designed to alleviate spread widening in peripheral countries. In the UK, headline inflation creeped up to 9.1% (y/y), and the BoE raised its policy rate to 1.25%. Elsewhere, the SNB surprised markets by raising its policy rate by 50bps to -0.25%, prompting the Swiss Franc to appreciate. On activity, manufacturing PMIs continued to soften in the UK and eurozone, but remained expansionary.

Chinese equities outperformed other regional benchmarks. The June NBS PMIs returned to expansion territory, for the first time since February. The services PMI in particular recovered sharply as Covid restrictions eased in some cities. Elsewhere, the Japanese yen was the weakest it has been against the US dollar for over 20-years – the Bank of Japan continued to buck the tightening cycle trend, amid muted inflation and weak domestic demand. In fact, industrial production fell over 7% on a monthly basis in May, roughly 10% below its pre-pandemic level. 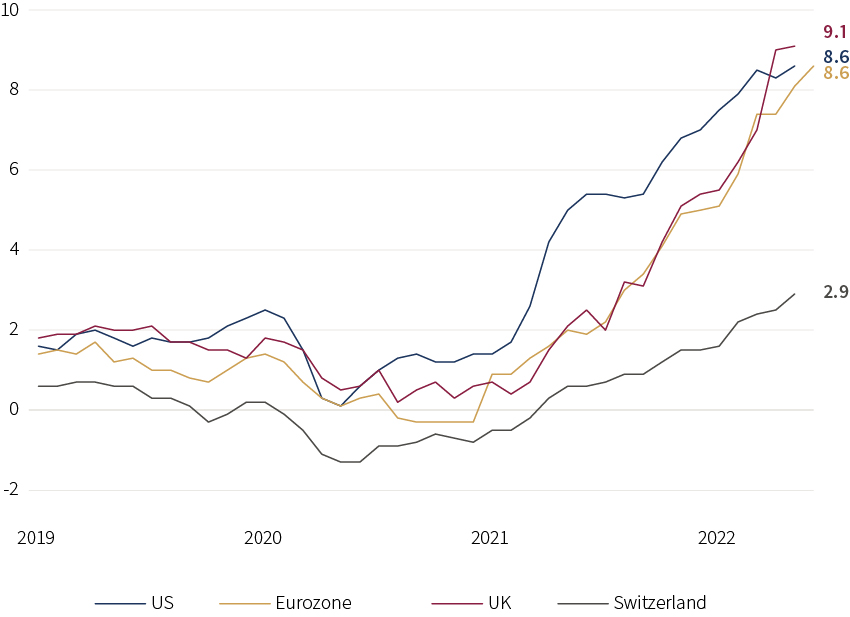