Stock and bonds came under pressure after Fed Chair, Powell, signalled that US interest rates will rise further and stay higher for longer at the Jackson Hole symposium. In Europe, the energy crunch intensified, as gas and power prices spiked sharply (though partially reversing this into month-end) in the face of tight electricity markets and further curtailed Russian gas supplies, with pipeline Nord Stream 1 undergoing maintenance. Elsewhere in commodity markets, crude oil fell to $96/bl over mounting growth concerns, and gold retreated in the face of rising ‘real’ interest rates and the strong dollar.

After the technical (though modest) recession during the second quarter, the activity momentum picked-up in July, albeit unevenly. A rebound in core retail sales and industrial output, contrasts with a slowing housing market, where new home sales plunged by 12.6% (m/m). Labour markets continued to tighten, with 315,000 jobs added in August, while the ISM Manufacturing PMI held steady (52.8) in August and its forward-looking new orders subindex moving back into expansionary territory. Despite headline inflation easing to 8.5% (y/y) in July – driven by falling gasoline prices – Powell reiterated the Fed’s objective: restoring price stability (and credibility). Markets have priced-in another 75bps hike in September. On Capitol Hill, Congress passed two pieces of legislation - the CHIPs act and the Inflation Reduction Act - in what is seen as a small legislative win for President Biden.

In Europe, spiking gas and electricity prices further weighed on purchasing power across the continent. In contrast to the US, annual inflation accelerated in the UK (10.1% in July), and also climbed to new record highs in the euro area (9.1% in August). An increasingly hawkish ECB has signalled that a steeper path of hiking may be necessary, with markets now discounting a large 75bp interest rate hike in September. Meanwhile, the euro area’s economic momentum continues to fade: the S&P Global Manufacturing PMI fell to 49.6 in August, the lowest level since May 2020, and new orders declined sharply. With respect to politics, the UK Conservative Party leadership campaign is entering its final stage and in the upcoming Italian election, far-right and nationalist parties are leading the polls.

Chinese equities outperformed - flat in absolute terms - over the month, supported by the People's Bank of China decision to cut its medium-term lending facility interest rate – in a bid to stabilise the real estate market and to boost general demand. However, the impact of widespread COVID lockdowns and electricity shortages continues to weigh on activity, with the Caixin Manufacturing PMI falling to 49.5 in August (from 50.2). In Japan, the Jibun Bank Composite PMI fell to 48.9 in August of 2022 (from 50.2) which was the first contraction of private sector activity since February. Faster inflation (2.6% y/y) is starting to dampen household consumption, unaided by renewed currency weakness (the yen at a fresh 24-year lows against the dollar) which is driving up the cost of imports. 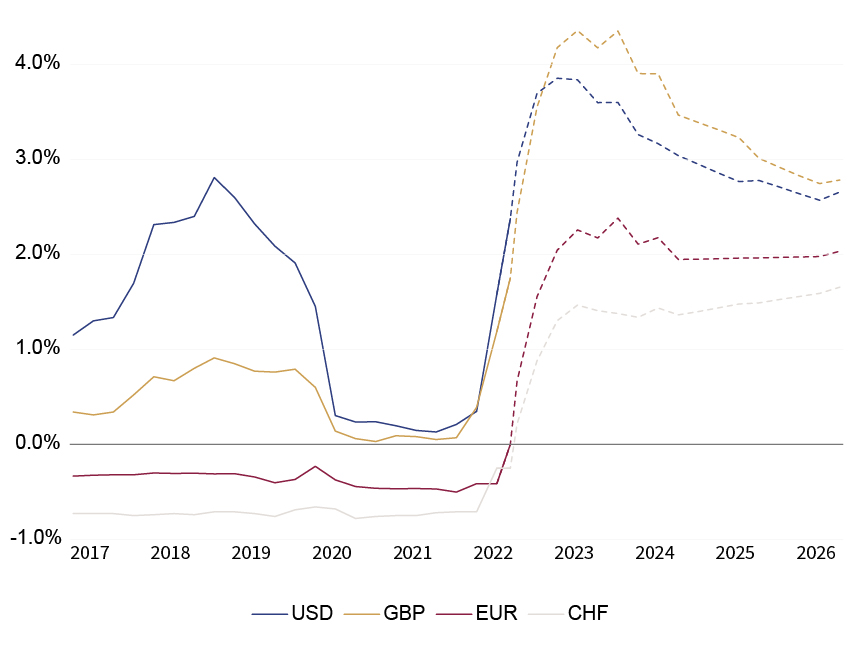