A dramatic downturn, but how long will it last?

The superlatives are mounting. This downturn is already the fastest, the first to be deliberately engineered, and the least contentious (we all agree what is occurring and why).

We have seen a full cycle's US unemployment claims (22 million) compressed into four weeks' data. Looking ahead, double-digit declines - on a non-annualised basis - in GDP and corporate earnings (EPS) are plausible. Arithmetically, one saving grace may be that the lockdowns' centre of gravity straddles two quarters.

It is tempting to hope that monetary and fiscal support may avert it, but this might be to miss the point. The authorities have acted with unparalleled speed and scale, having learned from 2008 (and in turn from the 1930s), but they cannot - and are not trying to - stop economies shrinking. Instead, they want to reduce the longterm damage and suffering that closing much of the economy will cause. Some businesses inevitably will fall between the cracks. Sadly, the poorest families will suffer most, as always.

For now, we would not worry about the public cost of those measures. We don't know how much support will be taken up. Bond markets are telling governments that funds are available. The idea that we are borrowing from future generations is fallacious. There is also the possibility - and reality, as quantitative easing (QE) is revived and expanded, and day-to-day central bank financing rises - of money printing, though we see that as riskier. Systemic financial risks may also be manageable. Bank capital was rebuilt - more so in the US and UK than in the eurozone - and loan growth was subdued in this cycle. Interest rates are low in real as well as nominal terms.

The downturn suddenly upon us is big, then. But to draw comparisons so quickly with the Depression - as many pundits are - is mistaken as well as tactless. The misery then - to which The Grapes of Wrath is a better guide than economics texts - lasted for years. Living standards now, even at their looming lows, and for the poorest, are much higher.

The reaction to COVID-19 has been so much more dramatic than we'd thought, but we still think the worst disruption might not last long. China's timeline - and there has not yet been a big second wave - may still be appropriate. Italy and Spain may be following a similar path, for example.

Moreover, public resolve may weaken, and lockdowns loosen, even if contagion doesn't slow sharply. The loudest dissenting voices so far have said that governments should have done more, sooner. There is now more public discussion of: 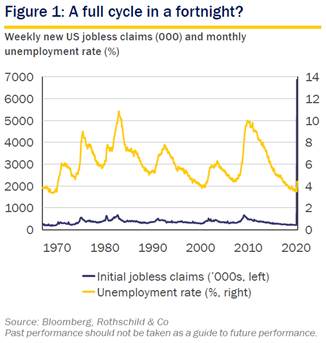 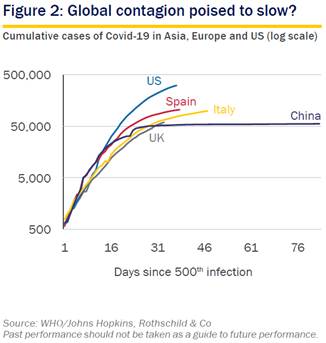 What sort of economic revival?

Usually the constraints are confidence and spending power. Now, the immediate constraint is dictat. When controls are relaxed, much business will resume.

Precision now - in either direction - is spurious. We think the precipitous drop may be followed immediately by some rebound. If policy stays expansionary, a return not just to the starting point, but eventually to the trendline we might otherwise have followed is feasible. We do not think long-term growth rates need be lower. Overall, a lop-sided V or “swoosh” profile seems likely: the rebound will take longer than the fall, as some businesses will fail.

Even when/if economies return to their earlier trajectory, some lasting damage to aggregate incomes will have been done: the area between recovery and the trendline in figure 3 will be painfully positive (more so for balance sheets, as bankruptcies and stranded assets drive a wedge between the path of GDP and capital).

Capital markets will however likely focus first on the direction of travel, not distance or speed.

Where does this leave stock markets?

Stock markets' response looks more understandable given the scale of suppression. That said, we thought they overestimated the long-term loss of business, and still do, even after their partial rebound. Losing even a full year's earnings would destroy only a few percentage points of market value.

We've seen the fastest-ever bear and bull markets. On 23rd March the MSCI all-countries index in dollar terms had fallen by 34% since mid-February's high. It has subsequently rallied by 22%, to stand “only” 19% below the peak.

We may yet see a new low. But the idea that “lows” are always revisited before recovery” is as fallible as other market lore. Arguably the 23rd March low was itself part of a “revisiting” process.

Corporate earnings are set to slump for a while, and dividends have already been cut, making it (even) more difficult to value stocks. We'd focus on cyclically adjusted PE ratios and maybe price/ book ratios. They suggest stocks were more expensive than usual in January, but having fallen back below it are now at trend (that is, they are not clearly “cheap”). Metrics that take interest rates into account - such as discounted cashflow - do make stocks look cheap, but are more contentious.

Valuations are less likely (at least, not unless they fall drastically further first) to trigger a rebound than news on contagion and lockdowns. 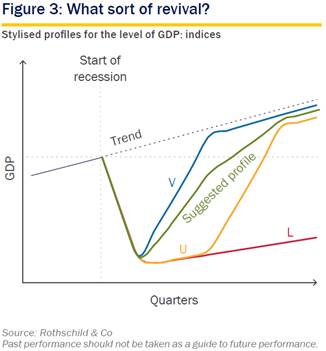 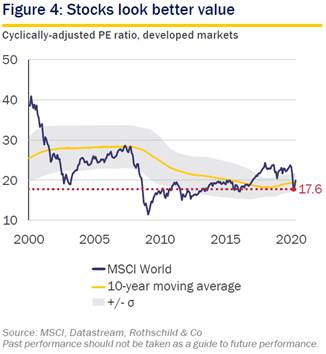