Stocks and bonds can lag inflation - but needn't

The autumn/winter stock market sell-off eliminated 2018's gains. Bonds have been lacklustre too. As we write, the year's total returns from most big stock and bond markets, in most currencies, trail most consumer prices - and pay. 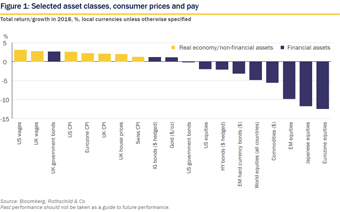 It has been a better year for wage income than for investment returns.

Our primary aim as wealth managers is to try to preserve and grow the real value of clients' assets over the longer term. At the risk of stating the obvious, this is not easy when the big markets are underperforming inflation.

Individual years like 2018 may be tolerable, but a run of them - or a bigger shortfall - would be demoralising for investors and managers alike. Why bother with markets if they put the real long-term value of savings at risk?

In practice, such 'alternative' asset classes are illiquid, unprotected - good luck with that Leonardo attribution - and difficult to track. There are few widely-used indices even of investible real estate, let alone classic cars and paintings.

They can seem as cyclical and faddy as conventional assets anyway. This time a year ago, Bitcoin was riding high. Today, it looks like a complicated answer to a question nobody's asking.

There are few viable alternatives, then. To compound the difficulties, we never know exactly why conventional assets do what they do, at least in the short term. Nobody can know what precisely is motivating the many thousands of influential participants in those markets.

…but the macro picture is not grim

The setback has been big enough to have been worth avoiding - if it had been that predictable. Does it reflect an unexpected (by us) response to a macro picture that is broadly as expected, or an anticipation by the markets of a pending worsening in that picture - or a bit of both?

A more testing mix of slowdown and still-rising US interest rates has always been on the cards. Synchronised, above-trend growth like that in late 2017 doesn't happen often. US corporate earnings don't rise by roughly a quarter every year - especially when one-off tax cuts have driven a big chunk (perhaps half) of that. And with US unemployment at a half-century low, and real interest rates still firmly below trend, what should a prudent central bank be doing?

But did such a mix have to hurt markets? US slowdown - proxied by the ISM survey - has often coincided with rising interest rates, and US stock prices have typically risen, not fallen.

It's not as if valuations now are outlandish - we noted last month that they're not.

So perhaps markets have got wind of more testing times, or a looming (re-)escalation in those trade tensions and other political risks?

We know that when things do go wrong for business, corporate earnings don't just slow down - they fall, a lot.

During the Global Financial Crisis (GFC), developed world earnings as compiled by MSCI fell three-fifths in dollar terms. After 2000's dotcom fiasco they fell by two-fifths. Both those falls were amplified by companies having to write off assets - banks in the GFC, and telecom and media firms after 2000. After a plain vanilla recession - in the US, then Europe - in the early 1990s, they also fell sharply, by roughly a third. They fell by almost a fifth when oil prices slumped after 2014, though the market response was muted.

Corporate balance sheets currently are less likely to contain lots of dodgy loans (as per the banks in 2007) or overvalued recent acquisitions (as per telecoms and media in 2000).

Recession - and/or weaker oil profits - is more likely given a US expansion in its tenth year. But as yet, cyclical indicators - including the widely watched US yield curve and unemployment claims data - are not pointing to an imminent slump. We have seen similar slowdowns on several other occasions since the GFC. Third-quarter growth in Germany and Japan was hit by one-off factors including auto sector retooling and natural disasters, which may lead to a short-term rebound.

One of the key supporting pillars of the US economy in this cycle is still intact - there are few signs of macro imbalances of the sort seen in 2000 and 2007. Specifically, US consumers have not been borrowing recklessly, but are still effectively providers of liquidity.

This is no guarantee of continuing growth - maybe US households will now permanently target higher savings rates than in the past - but we think it mutes some potential risk. Meanwhile, consumer confidence has been high, and unemployment at a 50-year low.

If we're right about the macro climate, that doesn't guarantee a better 2019 for portfolios. Growth, monetary policy, corporate profitability and valuations affect markets episodically and jerkily, not continuously and smoothly, which is why the process is so hard to model.

Political tensions are not new

US-China tensions may hit markets even if the macro climate is otherwise fine. Just when it seemed as if an uneasy tariff truce had been reached on the G20 sidelines, the US judiciary demonstrated its independence by trying to extradite a well-connected Chinese technology company's chief financial officer.

Geopolitical risk is not new, however, and bad outcomes are not inevitable. Indeed, until that judicial move at least, China's measured response to the US administration's high-stakes tariff gambits seemed to support our belief that more positive outcomes have been possible.

China is by a clear margin still the most protected and closed big economy, and knows that the US administration has a point, however clumsily it makes it. China also knows that liberalisation has made it wealthier, and remains in its own interests - it can afford to be relatively constructive. History buffs will note the striking reversal in fortunes in China's offer to limit exports of (synthetic) opiates.

So too is what looks like a looming constitutional crisis in the UK. A parliamentary vote on the Withdrawal Agreement has been postponed.

There is no visible majority yet for any of the three options realistically on the table (deal, no deal or stay) and the UK government - we use the term loosely - has no obvious plan of action.

We can only restate our belief that the lasting damage to sterling-based portfolios of a no-deal exit will be limited. A lower exchange rate will help, and the UK economy is probably more resilient than government and Bank of England economists suggest. But we continue to hope that we don't have to find out.

Markets don't have to deliver...

Market timing is really difficult - clearly - and if we try to fine tune our advice now we may find ourselves stranded out of the market if/when it rebounds. We think long-term inflation-beating returns are still available.

They do not have to be. There is no law of markets that says they must do what we want them to - that is, preserve and grow real wealth on a long-term view. Historically, there have been quite lengthy periods when they haven't.

Figure 3 summarises the last century or so of US stock and bond returns. The UK experience (not shown) is remarkably similar (continuous data for other big markets are harder to get).

There have been three decades in which a 60:40 mix of stocks and bonds - a typical 'balanced' portfolio these days - failed to deliver an inflation-beating outcome, and a fourth in which it was marginal: the 1910s, 1940s and 1970s, with the 1960s as the marginal one. There was almost half a century in which it did little more than match inflation, between 1936 and 1981.

On closer inspection, the immediate driver of the poor returns was the government bond market. In each of those decades, bond returns fell below inflation, while in three of them - the 1970s being the exception - real stock returns remained positive.

What those periods have in common, at the risk of oversimplification, is that inflation itself was relatively high in each of them. In three of the four, the inflation was associated with war, and 'too much money chasing too few goods', but in the 1970s, there was a bigger 'cost push' component thanks to OPEC and poor industrial relations.

The fact that the UK's inflation experience was similar - if anything, it was more disruptive, and in the 1970s, UK stocks struggled more than both gilts and US stocks - suggests that there was some common causality at work.

Given the recent obsession with deflation risk, it is worth noting that the only deflationary episode here - the 1920s and 1930s - saw both US and UK balanced portfolios, and both stocks and bonds, delivering firmly positive real returns. This is despite these decades including the 1929 crash and the subsequent Great Depression.

On reflection, this makes sense. Most bond coupons and principals are fixed in nominal terms, and their real worth is especially vulnerable to prolonged inflation. Stocks are not immune, but are arguably a sort of real asset themselves - small portions of real businesses.

The reason US and UK stocks also did badly in the especially inflationary 1970s is that businesses then were also doing badly (profitability was poor, partly because of the cost-push inflation).

Real stock returns were also poor (in the UK as well as the US) in the 2000s, even though inflation was low and bonds performed well - but this followed the extreme overvaluations seen in the dotcom episode.

…but we think they can

This is why we are often focused on inflation. The bigger it is, the harder it is to beat. It has been associated with poor investment returns - usually from bonds, but also, when disruptive enough, from stocks too.

Even at today's modest levels of inflation, the prospective real returns on most bonds are negligible or (in Europe) negative. But they seem unlikely to be as weak as in the decades identified here. And unless inflation becomes much more disruptive - by pushing interest rates up dramatically, and/or by hitting growth - it seems unlikely to hurt stock returns. At today's valuations, and with trend economic growth rates in mind, stock returns can outpace inflation into the longer term - on average, if not necessarily every year.

Our top-down views are unchanged. Our portfolio managers hold some specific protection in anticipation of volatile stock markets, but a more defensive restructuring could leave us stranded if markets rally. A big surge in inflation, and/or a recessionary drop in profits, does not seem imminent, geopolitical risks are manageable, and stock valuations are now close to trend. Stocks can still deliver inflation-beating long-term returns.