With the United Nations’ 26th Climate Change Conference, COP 26, on the top of the 2021 event agenda, many countries around the globe have started reviewing their strategies to decarbonise their economies. As part of this process, the hydrogen debate is moving centre stage. It is multi-faceted: Hydrogen gas powers electric motors, stores energy, preserves food and has been hailed as a fuel of the future that could help end the world's dependence on fossil fuels as well as aid the transition to net zero emissions. But why is hydrogen so special? How is it structured and used? And what are its future market opportunities? In the following article by Investment & Portfolio Advisor Amaya Gutiérrez and Investment Insights Product Specialist Laura Kuenlen, we explore the answers to these questions.

Discovered in 1766 by the English chemist Henry Cavendish, hydrogen is the smallest, oldest and most abundant element in the universe. It constitutes up to 75% of normal matter and is essential for life: The sun is mostly made of it and it is present in almost all living things. On Earth, however, pure hydrogen is very scarce. Despite being everywhere, hydrogen, consisting of one proton and one electron, is found as a compound in combination with other elements, e.g. water, coal, or methane. That is why the US Energy Information Administration (EIA) defines hydrogen as an energy carrier and not an energy source: Hydrogen needs to be isolated and produced from an energy source to be able to transport energy from one place to another.[1] So how is hydrogen produced? For more information, please see our interview with the world's largest industrial gas company, Linde.

As discussed by Linde, Hydrogen is a colourless gas and is attributed to a colour depending on which energy source is used to produce it. At the end of its production process, hydrogen becomes a clean-burning fuel which only produces water (H2O) instead of Carbon dioxide (CO2). The creation of water as a by-product of the combustion process is the main pillar around which the hydrogen economy is currently being built.

Other benefits of hydrogen include:

With accelerated climate ambitions, hydrogen is increasingly being used as a key pillar in energy transition strategies. Individuals, corporates and governments are pledging to reduce carbon emissions in order to comply with the targets set at the 2015 Paris Agreement. To recap, this set out a global framework to avoid dangerous climate change by limiting global warming to well below 2°C (versus pre-industrial levels) whilst pursuing efforts to limit it to 1.5°C.  The number of countries that have so far pledged to become carbon-neutral by 2050 currently make up 70% of today's global emissions, with more than 30 countries having hydrogen strategies in place by now.[2] Policymaking, capital investment and broader economics to boost these are still at early stages, although governments (led by Germany) have announced that US$11.4bn[3] of annual national funding will go into clean hydrogen projects over the next 10 years. If fulfilled, the dependence on fossil fuels is expected to be cut from 82% of energy consumed globally today to around 25% in 2050. Fossil fuel use could then progressively be limited to plastic production or sectors where no alternative energy source is available. In that equation, hydrogen could cover up to 25% of world energy demand in the most optimistic scenario.[4] 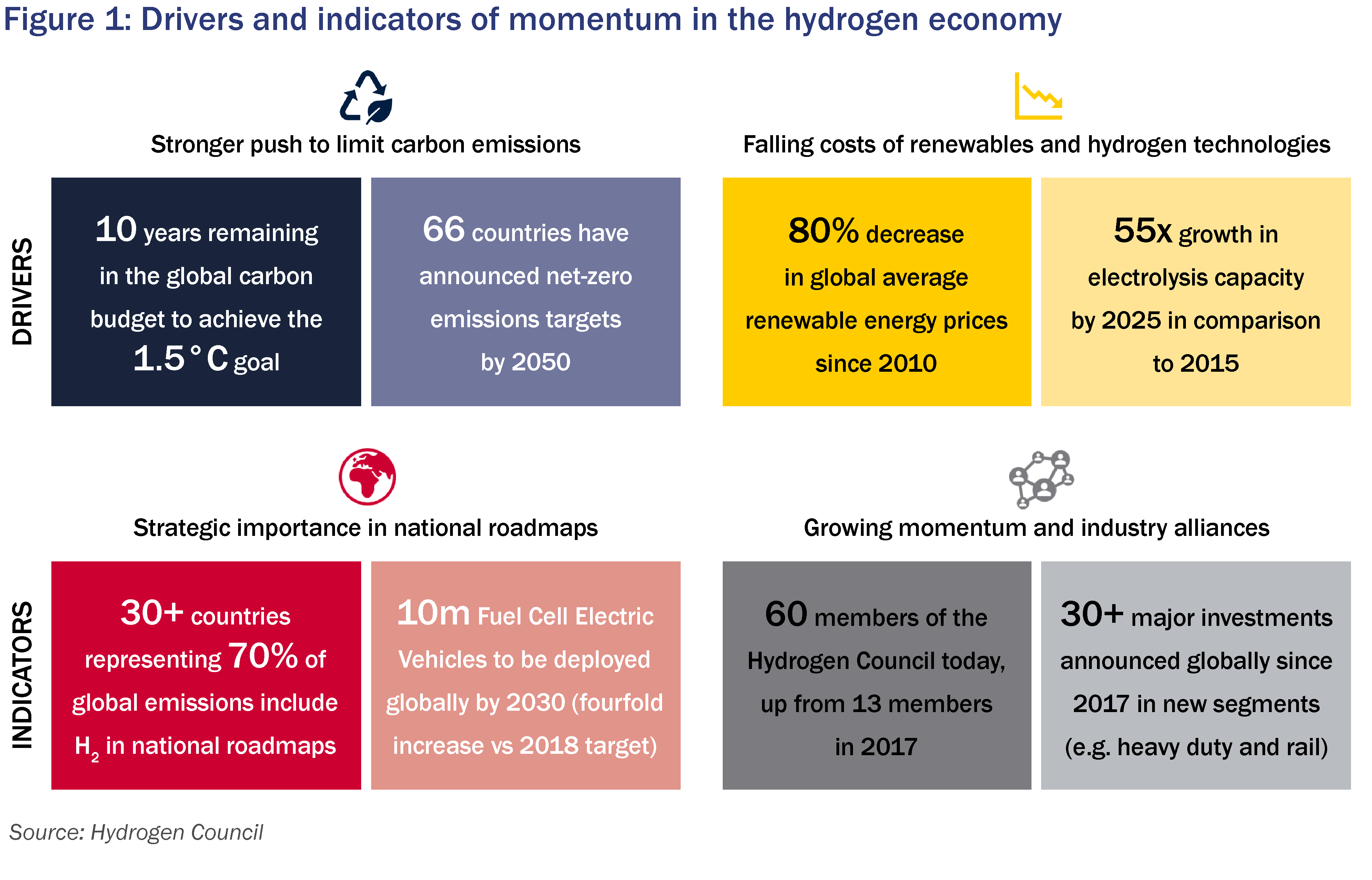 Currently, around 120 million tons of hydrogen are produced annually[5], most of which are used as a chemical product in the oil refining or fertilizer industries (see our interview with Linde for the break down). That figure should increase five-fold (to 614 million tons by 2050) as hydrogen is used in energy-intensive, hard-to-decarbonize sectors such as shipping or steel. To create a carbon-neutral economy, most of that hydrogen will need to come from renewable sources. The technology already exists in the use of electrolysis (to separate water into H2 and O), powered by renewable energy (that produces no carbon emissions).

Until now, though, costs have been the main constraint to hydrogen's dissemination. Initiatives are under way to lower them, including the UN's Green Hydrogen Catapult. This project, which was launched by the world’s biggest green hydrogen developers, aims roughly to halve the price of hydrogen to US$2 per kilogram (equivalent to US$50 per megawatt hour) by 2026. The US government has also put in place programs to make H2 production more affordable e.g. the US Hydrogen Energy Earthshot which through its "1,1,1" program aims to lower the price of clean hydrogen by 80% to US$1 per kilogram by 2030, 1/5th of the price level of Q4 2021.

The nascent hydrogen economy will have an impact on many industries:

- Mobility and traffic, where the competitiveness of hydrogen fuel cell transportation depends on fuel cell costs and refueling stations. Furthermore, shipping and aviation have limited low-carbon fuel options available and represent an opportunity for hydrogen-based fuels.

- Building heating and electricity, where hydrogen could be blended into existing natural gas networks with the highest potential in multi-family and commercial buildings, particularly in dense cities. Longer-term prospects could see the inclusion of hydrogen in boilers or fuel cells.

- Electricity generation, since hydrogen is one of the leading options for storing renewable energy, and it can be used in gas turbines to increase power system flexibility.

- Industrial energy and commodities that can decarbonise their industrial processes thanks to hydrogen.

According to a McKinsey study, over 30 countries have released hydrogen roadmaps and governments worldwide have committed public funding in support of decarbonisation through hydrogen technologies. No less than 359 large-scale projects have been announced along the value chain and it is estimated that the total associated investment through 2030 will amount to USD 500 billion. Technological advances make hydrogen production cheaper and more efficient and this along with governments' commitment is helping drive a new hydrogen economy. So, is hydrogen the answer to reaching net zero? The prospects for hydrogen seem exciting and there are high hopes that the most abundant element in the universe could finally help solve the world's drive to carbon neutrality.

As mentioned in our interview with Linde, the hydrogen market can be considered hot. With plenty of pilot projects out there, it is all the more important to approach this topic with the right adviser. With our Investment & Portfolio Advisory team, we have spent time analysing the hydrogen market and look forward to answering your questions at a time convenient for you. Please do not hesitate to contact your client adviser.