Q1. For our readers, can you outline Linde's current expertise in hydrogen and its outlook on the market?

Today Linde sells more than USD 2bn of hydrogen and manages the largest refineries and distribution network for hydrogen globally. By 2030, the Hydrogen Council estimates the hydrogen market to be worth some USD 100bn. Behind this growth, the market is currently seeing countless decarbonisation projects which rely in part or in full on hydrogen. Many of these plans, however, require careful financial analysis. Of the over 200 projects under review, Linde will remain very selective in terms of those it bids for. In the next 3-4 years, Linde estimates it will be investing USD 3-4bn in decarbonization projects, all meeting the company’s investment criteria. Whilst hydrogen offers exciting opportunities for assisting the world in its race to decarbonise, we think a big wave of investment in this energy source will come towards the second half of the decade once local infrastructure requirements for the production, storage and distribution of hydrogen are set in place.

Q2. What do the various colours of hydrogen mean and what approaches are countries taking?

At the outset we should remember that the production of hydrogen can take many forms (Exhibit 1: The different types of hydrogen) and may rely on energy sources which are not carbon-neutral. 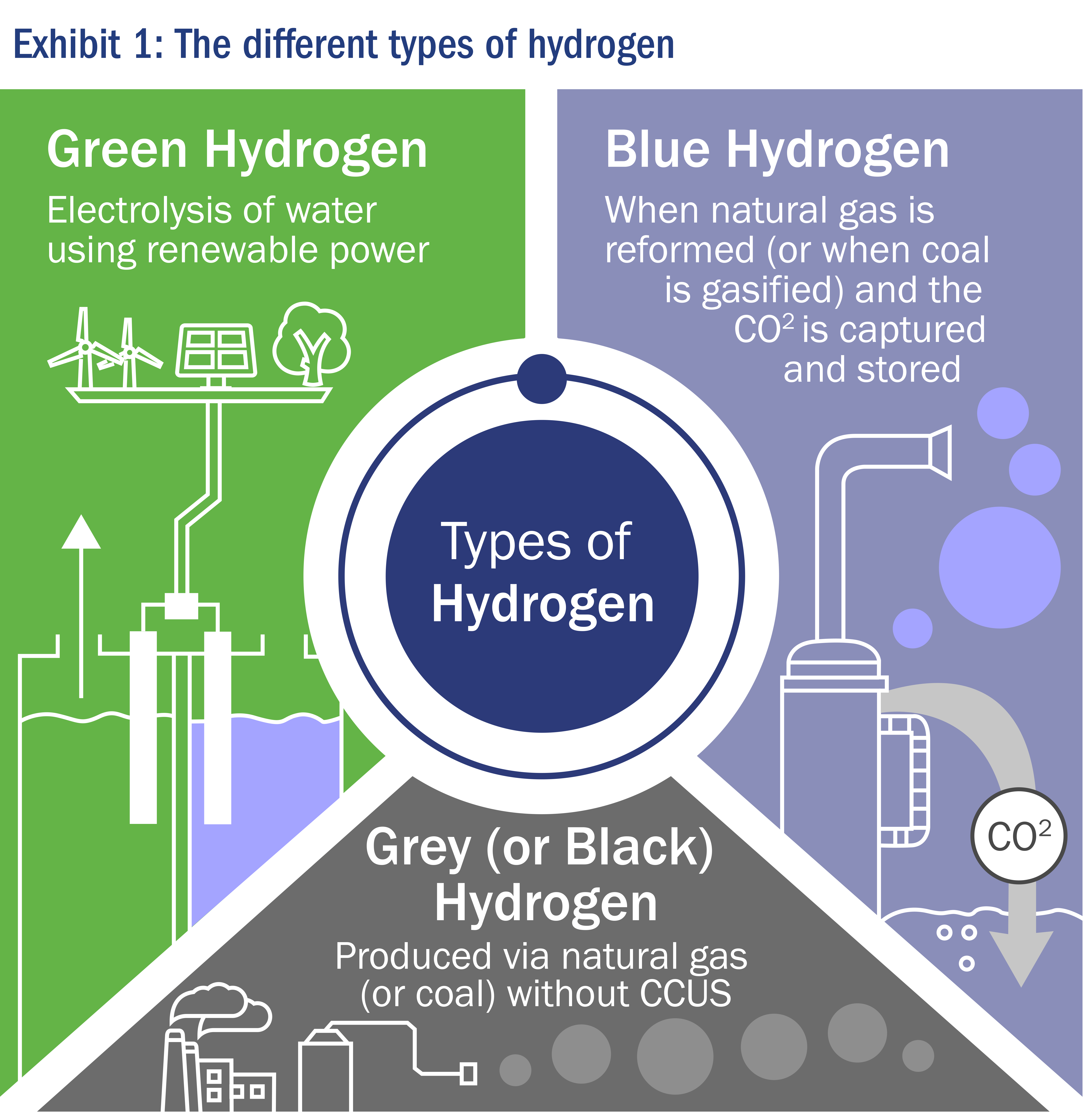 The use and adoption of different coloured hydrogen has varied across developed nations.

In Asia, countries have tended to favour building out existing hydrogen infrastructure with the aim to switch to green hydrogen as renewable energy capacity increases. An example of this is South Korea which is now a global leader in terms of its hydrogen infrastructure with sophisticated distribution and storage networks catering for hydrogen irrespective of production colour. Linde's joint venture with Hyosung Corporation in South Korea saw Linde commit to building and operating Asia's largest liquid hydrogen facility with capacity to produce over 30 tons of hydrogen per day, enough energy to power 100,000 cars.

Q3. What are hydrogen's main uses as a commercial fuel and where do you see its greatest use?

Hydrogen's use in the global economy is multi-faceted but one key green area is mobility. Hydrogen has been used in space rockets since the 1950s when NASA started using hydrogen not only as a jet fuel but also to power the electrical systems on board spacecraft. In keeping with this tradition, Linde now supplies hydrogen to commercial space providers such as Blue Origin. In recent years, hydrogen has also become an increasingly viable fuel for point to point travel, from ferries in Norway, to trains in Germany and busses in South Korea.

For passenger cars, batteries are preferrable to hydrogen due to the logistical constraints around refuelling and the high cost of hydrogen fuel cells. However, for freight and bus transportation, hydrogen is a viable and fast-growing alternative to fossil fuels. In the manufacturing sector we are starting to see hydrogen in the production of steel. This is significant given that the steel industry accounts for some 20% of industrial carbon emissions in Europe.

We should not forget however that at present hydrogen's principal industrial use is still for ammonia production - primarily fertilizers, petroleum refining, methanol production and, amongst other uses, processing foods  (Exhibit 2: Global hydrogen consumption by industry). The role of hydrogen as a green fuel is therefore just part of the story.

Q4. What remain the greatest challenges in the use of hydrogen as a means of achieving ambitious government carbon targets?

Operational challenges around the supply of renewable energy for electrolyser plants remain a key hurdle for converting hydrogen from grey to green. Until recently the sector was caught in a circular conundrum in which demand was contingent on there being production at scale, but governments and private operators weren't willing to invest in scaling production without securing demand. We are seeing the whole debate move on now that governments have set themselves stringent carbon-reduction targets over the next 20-30 years.

Finally, as mentioned at the start of this interview, the hydrogen market is currently "hot", meaning there are plenty of speculative projects out there. One challenge we face is to carefully select those hydrogen projects to which we will dedicate Linde's time and resources so as to make a discernible difference to the long-term development of hydrogen.