'Risk on' prevailed in November as global equities rallied, +2.8% (in local currency), while global government bonds were weaker, -1.1% (unhedged in USD):

Optimism over a 'phase one' US-China trade deal and improving economic growth pushed the S&P 500 index to new highs, as volatility remained subdued. Corporate activity appeared buoyant with KKR's pending buyout of Boots Alliance Walgreens, potentially the largest LBO ever. Movements across fixed income were fairly muted, with some modest tightening of credit spreads, while oil advanced in the month (Brent +4%) ahead of OPEC discussions next week on production cuts. USD and GBP held firm, with EUR, JPY and CHF softening, together with gold (-3.2%).

While a 'phase one' US-China trade deal is yet to be concluded, President Trump's impeachment inquiry has gathered pace. Following a month of testimonies to the House Intelligence Committee, the Democrat-controlled House is paving the way for the drafting of impeachment charges and the crucial vote. Manufacturing surveys offered a mixed picture of US industry, with the ISM in contractionary territory for the 4th consecutive month (in contrast to the improving Markit manufacturing PMI). Other data, including the non-manufacturing ISM, point to respectable growth. Minutes from the October FOMC meeting reiterated the Fed's 'dovish pause'; meanwhile, the Fed continues its purchase of treasury bills at rate of $60bn per month in an effort to boost short-term money market liquidity. Corporate earnings surprised positively, with third quarter results delivering only a modest fall in profits.

Germany narrowly avoided a technical recession after expanding modestly in the third quarter (+0.4% SAAR). Eurozone inflation increased in October (+1% y/y) but remains below the ECB's target - a more sustained increase may be unlikely given subdued growth and business confidence. The ECB's remit may be expanding, given Lagarde's prioritisation of climate change initiatives alongside inflation and financial stability. On the geopolitical front, the second Spanish election of 2019 left the government weakened as tensions with Catalonia grew. In the UK, December's election looms, and polls currently suggest the Conservative party is on course to win a majority. But given the volatile and misleading polling data during 2017's campaign, the outcome remains uncertain.

Weak industrial output suggests the Chinese economy is still facing headwinds to growth. Consumer spending however still appears resilient, despite inflation rising to its highest level in almost 8 years (3.8% y/y), driven mostly by food prices - notably the doubling in pig prices (y/y) following the outbreak of African Swine fever. Japan's third quarter GDP slumped to a one year low (+0.4% SAAR), as softer global demand knocked exports and private consumption proved to be weaker than expected. October's consumption tax hike (from 8% to 10%) is likely to weigh on consumer spending in the quarters ahead. Protests in Hong Kong - now entering its 9th month - pushed the economy into recession in Q3. Meanwhile, civil unrest in Latin America appears to be broadening, with Colombia joining the wave of protests across Chile, Bolivia and Venezuela - albeit for different reasons. 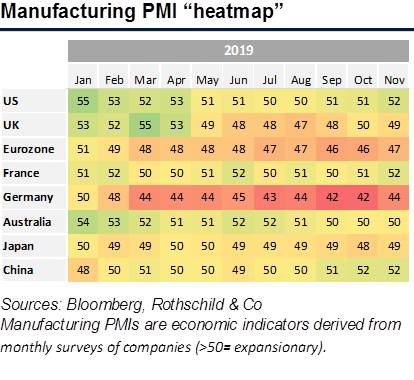 
In this Monthly Market Summary: