The first half of September saw a steepening of the 10yr-2yr US yield curve, whilst stocks and high yield credit rebounded. Oil prices experienced their biggest daily move in recent memory (Brent +14%) following a drone attack on Saudi oil supply but finished the month almost flat. Safe haven currencies (JPY, CHF and USD) fell back, while sterling strengthened despite ongoing political uncertainty. Gold meanwhile declined 3.2% in the month.

US equities fell at month-end following an announcement that the US may limit Chinese listings on its stock exchange, fuelling concerns of a re-escalation in trade tensions ahead of the October talks. President Trump also faced further political upheaval as the House launched an impeachment inquiry. Meanwhile, a weak US manufacturing sector - highlighted by a string of weak ISM readings - contrasts with a buoyant US consumer, with US retail sales continuing to grow at close to their fastest quarterly pace this cycle. As expected, the US Fed cut rates by a further 25bps, to a 1.75-2.00% range. Separately, a technical liquidity shortage squeezed money market rates above 7%, forcing the Fed to intervene and inject short term liquidity.

A technical recession in Q3 seems ever more likely for Germany, with PMI data falling to 41.4 - the lowest reading in nearly 7 years. Combined readings for services and manufacturing, as well as the closely watch IFO expectations index, suggest Germany is firmly in contractionary territory. The ECB voted to restart its quantitative easing programme at €20bn per month whilst also introducing a tiering for negative deposit rates to reduce costs for banks. Meanwhile, Eurozone bond yields rose at the end of month as Draghi - who is to retire as ECB President later this month - stressed the need for fiscal policy to support long-term growth in the Eurozone. With less than a month left, Brexit troubles loom large as PM Johnson's attempt to suspend parliament was stymied by the Supreme Court. With no working majority, the PM faces an even greater struggle to agree any substantive changes to the withdrawal agreement.

China's manufacturing PMI remained in contraction for the fifth consecutive month and industrial output slowed to its weakest pace of growth (4.4%) in nearly three decades, as the impact of higher tariffs is more keenly felt. However, Beijing's announcement of further cuts to banks' reserve requirements highlights policymakers desire to balance the need for modest monetary support while avoiding aggressive credit expansion. The Bank of Japan has signalled the potential for cuts to its short-term rates following a policy board meeting in September in their attempt to steepen the yield curve. 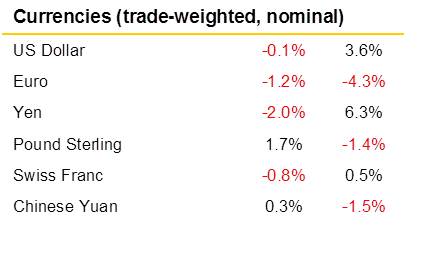