A war in Europe, an energy crisis, shades of the 1970's – inflation and industrial unrest – and sharply rising interest rates (the fastest pace of developed market policy tightening - three and half percentage points in 2022 - in four decades).

Unsurprisingly, market sentiment has been gloomy. Here are six charts which capture that mood. 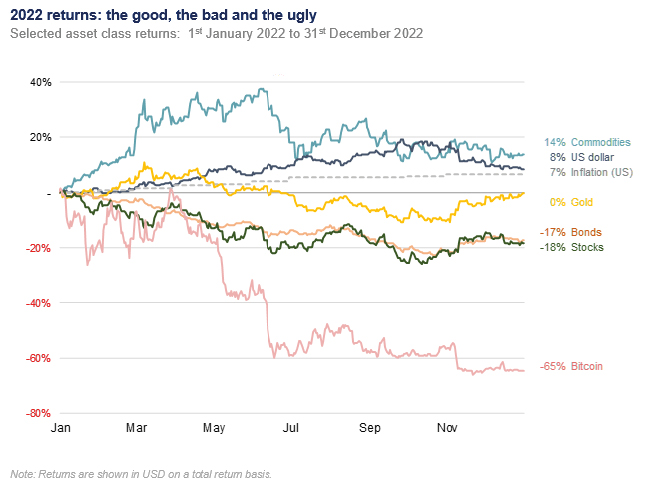 There were few hiding places this year. The major asset classes - stocks and bonds – were down double digits, while gold delivered a second year of lacklustre returns. At the trough, global stock prices had fallen by over a quarter (through to October) and the VIX (a measure of implied US equity volatility) touched 36% earlier in the year (compared to a "typical" reading in recent years of perhaps 15%). The stark contrast with the quiescent 2021 is striking: then, stock markets rallied 21% (in local currency), led by the US, which notched 70 new highs intra-year with a maximum drawdown of just 5%.

Not all assets performed badly. Some commodities – notably natural gas and several foodstuffs – moved higher as global supplies tightened. The US dollar also continued to appreciate against most currencies.

For some assets it has been even more challenging: Bitcoin's volatility is no surprise, but the 65% fall year-to-date reminds us that whatever it is, it is not a store of value or a risk diversifier.

2022 has not been an indiscriminate stock market sell-off: most of the bad news was centred around 2021's leaders. The US (-19%) and 'growth' stocks (-29%) led the market lower – the latter group dominated by many of the popular technology-orientated stocks. The retreat in the speculative end of the market offers a partial explanation, but this cohort's longer duration (more interest rate sensitive) attributes have also been in focus.

In terms of the 'winners', defensive stocks – utilities, staples and healthcare – outperformed the wider market (but were still down in price terms). But this wasn't a straightforward rotation. Some 'cyclical' and 'value' stocks – and regions – performed best of all. Notably, oil stocks extended their gains in 2022 (+48%). The UK also performed strongly (+7%), which may seem surprising given the year's fiscal and macroeconomic developments, but is less so when you consider its bias toward energy, resources, and its lack of technology.

Whether the more cyclical and 'value' orientated names can continue to outpace those 'growth' names in 2023 remains to be seen. 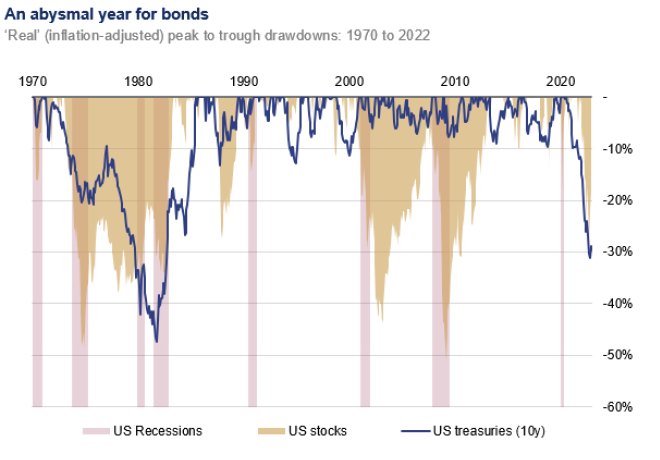 Stock market volatility is uncomfortable, but for bonds to be volatile is particularly unsettling. 2022 has been the worst calendar year return for bonds in the past half century: US treasuries (where we have the longest history), for example, are down 12% this year and down nearly a third in real terms from their peak in 2020. G7 government bonds (in aggregate) have unwound the last 12 years' worth of nominal gains.

The sharp repricing of bond yields saw the benchmark 10-year US treasury yield increase by nearly two and a half percentage points in 2022 to 3.9% (it briefly touched 4.2% in October). The story is similar in the UK and Germany, where the 10-year bond yield ended the year close to 3.7% and 2.6%, respectively (and yields briefly touched 4.5% in the UK).

It has been particularly painful for owners of longer dated bonds, where prices are most sensitive to changes in yields. At one stage, the very long-dated 50-year gilt lost three quarters of its value (year-to-date) following the UK's ill-fated mini budget in late September.

The 35-year bull market in bonds has after all ended abruptly. 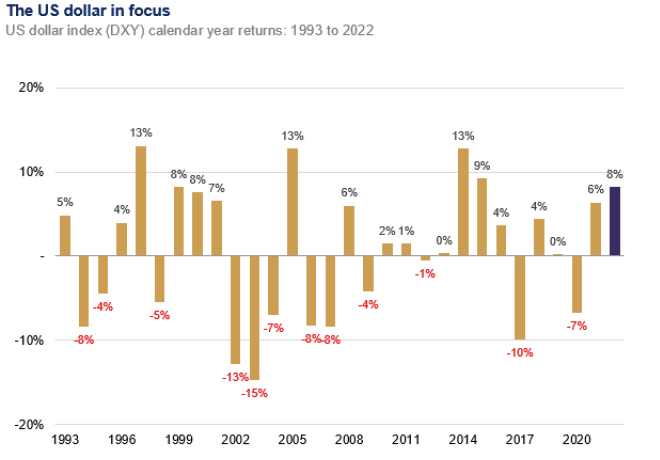 Dollar strength has been a prominent theme this year, buoyed by both fragile sentiment – it is seen as a safe haven – and widening interest rate differentials. The dollar spot index – which reflects a basket of major currency pairs –appreciated over 8% this year (having unwound some of its earlier gains in recent months).

While exchange rate volatility overall has been unremarkable in a longer-term context – implied volatility for the G7 currencies in 2022 was close to 9.5%, modestly above its long-term average – but some of the major cross rates attracted a lot of attention. Sterling touched an all-time intraday low against the dollar of $1.03 following the UK's fiscal fiasco in late September; the euro fell through dollar parity; and the Japanese yen hit a 30-year low to the dollar – though all three cross rates rebounded strongly into the end of the year. 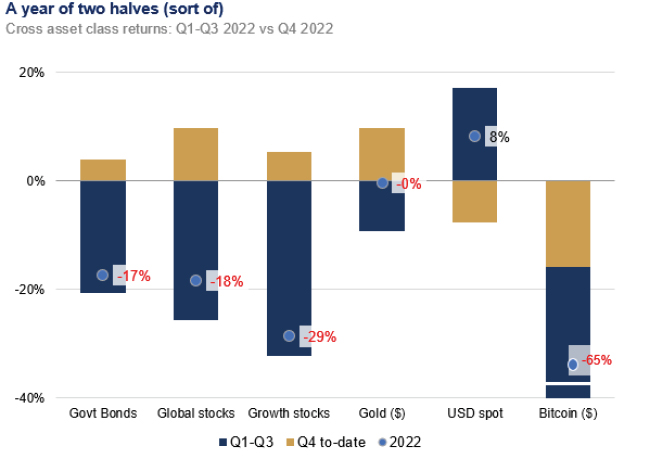 The overall declines for the year mask some marked partial reversals in the last quarter.

To the end of September, bonds and stock were down a fifth and quarter respectively, while the 'growth' stocks fell by a third – the worst period for this cohort as far back as we have records. But as we entered the fourth quarter, sentiment started to improve – just as US inflation and interest rate expectations seemed to peak. Bonds, stocks and even gold all benefitted, while the dollar's supremacy started to fade. That said, within equities, those 'growth' names didn't rebound quite as strongly – it wasn't a simple "beta bounce". 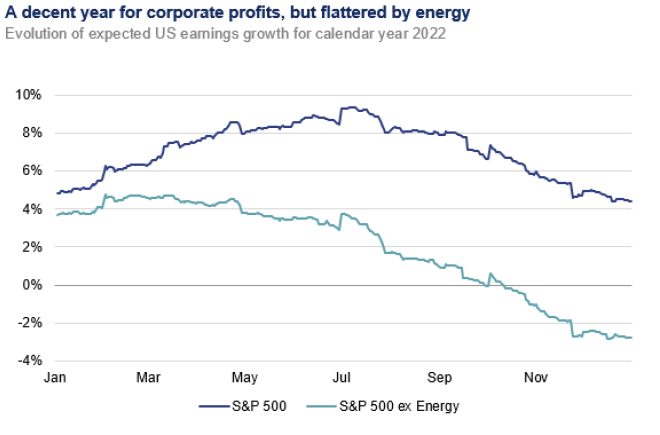 On the surface, 2022 has been a decent year for corporate profits: US earnings, for example, are tracking at a healthy growth rate of 4-5%. But this picture is flattered by the energy sector's outsized contribution: ex-energy, earnings are likely down c. 1-2% in 2022.

Expectations for 2023 remain remarkably upbeat, given the economic uncertainties, at 4% overall and 6% ex-energy. These are nonetheless downgrades from earlier expectations – at the start of 2022, analysts expected overall growth in 2023 of 10% – and earnings revisions (the ratio of analyst upgrades relative to downgrades) remain firmly negative. Slowing revenue growth and elevated profit margins suggest they may remain so.

We started 2022 feeling that valuations were expensive (though not prohibitively so, in the case of stocks) and that monetary conditions were too loose in the context of emerging inflationary pressures. That said, we did not expect stock markets to fall, or bonds to be hit quite so hard (or Russia to invade Ukraine, of course).

Looking ahead, the starting point for 2023 is in interesting one: government bond valuations are less stretched – having briefly hit "fair value" in the US and UK, while stock valuations are close to neutral.