Capital markets were volatile through May. After the longest series of weekly losses for major equity indices since 2001, equities recovered by month-end, while regional bond yields diverged. Over the month, global equities rose 0.1% (in USD terms), while global government bonds fell 0.5% (in USD). Key themes included:

As expected, the Fed raised its main policy rate by 0.5% and announced the scaling back of its balance sheet (‘QT’) from June. Fed Chair Powell also signalled a steeper path of hiking - further 50bps hikes at the upcoming meetings. The annual inflation rate for April eased to 8.3% (from a 41-year high of 8.5% in March), marking a possible cycle peak. Meanwhile, hard data for April suggested that the US economy has decent momentum: the unemployment rate remained at 3.6%, while retail sales rose by 8.2% yoy (up from 7.3% in March) and industrial production expanded by 6.4% yoy (up from 5.4%). Timelier business survey data for May suffered from higher input costs and concerns about higher interest rates, but still signal solid growth. The S&P Global Services PMI fell to a four-month low of 53.5 (from 55.6 in April) and the Manufacturing PMI fell to 57.5 (from 59.2), the lowest value in three months.

ECB Chief, Christine Lagarde, signalled the first interest rate hike in a decade from July – shortly after the ECB concludes its bond purchase programme (APP). Money markets have discounted four hikes in the second half of 2022, with the year-end deposit rate close to +0.5%. Preliminary estimates of the annual inflation rate for the Euro Area increased to a record 8.1% in May (up from 7.4% in April), as energy and food costs continued to move higher. The S&P Global Eurozone Manufacturing PMI fell to 54.6 in May (from 55.5 in April), the lowest reading since November 2020 due to concerns about the outlook of prices, supply chains and demand. EU leaders agreed to cut 90% of oil imports from Russia by sanctioning Russian crude oil that is delivered by shipments.

The NBS Manufacturing PMI for China rose 49.6 in May from April's 26-month low of 47.4, amid an easing of Covid-19 restrictions. This print marked the third straight month of contraction – the same applies to the Non-Manufacturing PMI which rose to 47.8. Yet, the announcement of stimulus measures improved investor sentiment. In Japan, industrial production decreased 4.8% yoy in April while retail sales rose by 2.9% yoy. 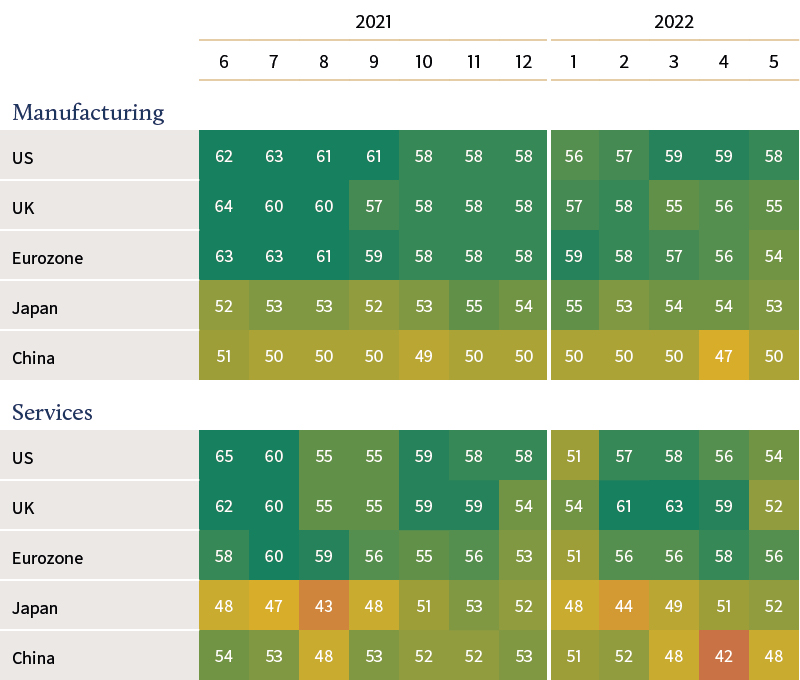