Pessimism is contagious – and it’s not just markets which have been fretting about the outlook. Consumers are especially anxious according to the latest batch of sentiment surveys. Most gloomy of all are UK consumers, who seem to be on the verge of an existential crisis, with pessimism close to a 50-year low (since the GFK first started compiling survey data). 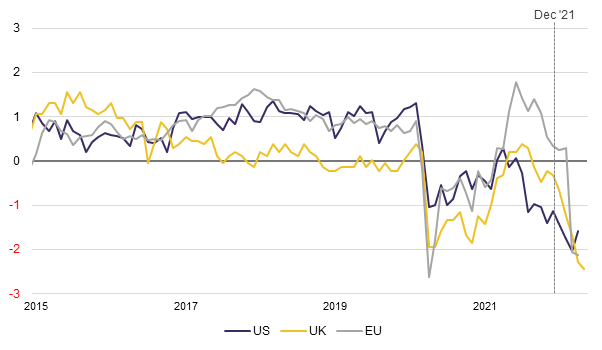 It’s unsurprising that consumers are somewhat concerned – there probably hasn’t been a period in recent history with such a confluence of threatening factors: inflation; rising interest rates; and (of course) the threat of war. Whether this warrants a half-century low is debateable (didn’t things feel worse as the pandemic lockdowns were imposed?). But the news machine has concluded that households are about to stop spending and recession is imminent.

The hard data – what consumers are actually doing - paints a much more upbeat picture.

While most of those sentiment indicators have been in freefall for some time, consumers have continued to spend. For example, US retail sales – which measure the sale of goods (durable and perishable) to end consumers – just notched its fourth consecutive month of gains in nominal terms, +6.8% year-to-date (or by our estimate +3.7% in ‘real’ terms). Even retail spending in the ‘fragile’ UK economy has expanded 2.3% - in somewhat lumpy fashion – since the start of the year.

The data are not perfect. There are pandemic mix effects, and retail sales may be fading in importance in an increasingly service-based economy. Moreover, the unavoidable additional expense of higher “real” fuel and food prices does not reflect discretionary purchases.

But the underlying trend is likely still positive. Real ‘core’ US retail sales – which removes energy and some other volatile expenditures and adjusts for inflation – are up a respectable 2.1% since December. The broader, less timely Personal Consumption Expenditures (PCE) measures – which reflects both goods and services – moved firmly higher in the first quarter. 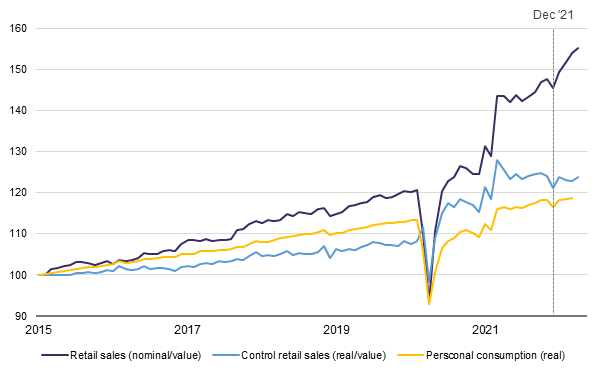 There is often a disconnect between what we as consumers ‘say’ and how we behave. Until incomes and/or wealth are affected materially, purchasing patterns may not change. For example, consumers may be concerned about the threat of inflation on spending power, but until they are more directly impacted this may not affect their habits. For example, having not been able to buy a car or foreign holiday very easily in the last two years they may now be determined to do so. For many consumers – but not the poorest of course – savings can provide some flexibility.

The ongoing ‘cost of living’ squeeze is also muted by wages and employment edging higher, as we noted last week. Average earnings in the UK actually outpaced inflation over the year to March for example, though that reflects post-pandemic compositional changes and bonuses alongside faster pay growth.

For now, we would avoid reading too much into those consumer sentiment surveys – and focus on the actual spending. What consumers do is more important than what they say they feel.