Alongside the terrible human cost, the conflict will have an economic impact: more inflation, and less growth. The inflation comes from squeezed energy and commodity markets, and from supply-side disruptions; the threat to growth comes from those higher energy costs, the disruptions, and from the likely impact on consumer and business confidence of the first major threat to global peace in our working lifetimes.

The prospect of (even) more inflation alongside deteriorating growth prospects is prompting talk of stagflation (output “stagnation” + price “inflation”). Such an outlook is perhaps the most difficult conjunction conventional portfolios can face: a poor economic growth environment is bad for corporate profitability and stocks, while high inflation is bad for bonds and other nominal assets – there is no obvious hiding place.

Stagflation was coined as a description of the difficult macro climate of the 1970s and early 1980s. In the decade ending 1983, average annual US GDP growth halved, to 2%, while average inflation doubled, to 8%. Over the same period, average UK GDP growth fell by two-thirds, to just 1%, while average inflation more than doubled, accelerating from 6% to 14%. It was a testing period for wealth managers (see figure), with both bonds and stocks often falling well behind inflation (though markets were able to rally strongly towards its end, as policymakers – and voters – signalled a determination to tackle at least the inflation part of the problem.). Cash performed more strongly than securities thanks to its nominal stability and high interest rates, but it still lagged behind inflation. 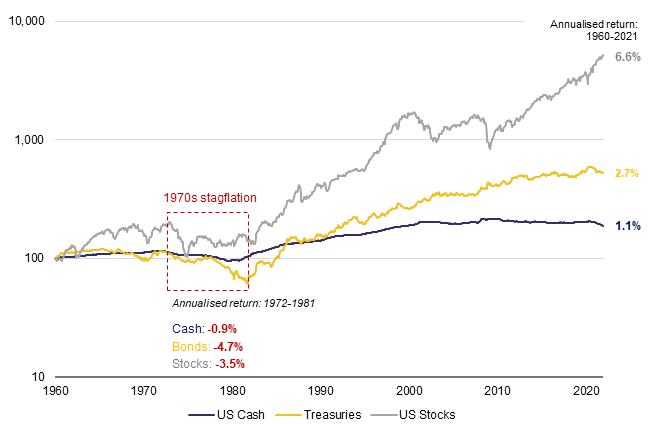 The potential parallels now are clear – much of the really serious inflation then was amplified by war and oil prices – but the headlines are premature. For one thing, today’s weakening growth prospects and/or rising inflation may prove relatively short-lived: the episode is too young to warrant talk of a new investment regime or epoch. The original stagflation was a long time brewing – it didn’t arrive (as today’s headlines have) almost overnight. Going into this episode, economic growth has been reviving, showing more post-pandemic momentum than many had feared.

For another, the stagflation itself may have been a symptom of a deeper malaise, and it may have been that sickness, not the growth and inflation rates themselves, that was the prime mover of the poor investment returns. Then, the industrial relations backdrop had been steadily worsening for many years, and corporate profitability – and any notion of “shareholder value” – was fragile.

Things recently have been very different in both these respects. And the structure of the big economies has shifted markedly towards service-sector and virtual output, reducing the importance of the tangible primary inputs and manufactures that have led inflation higher so far.

We do have strategic misgivings about bonds, as we have written here often. We have also become tactically less positive on stocks in 2022 – initially as it became clear that the big central banks might at last be ready to start raising interest rates, and then on account of the risks posed by the invasion of Ukraine.

But it is too soon to consider a bigger, wholesale shift into the sorts of real assets – property, gold – that might offer intuitive protection if the double whammy of stagflation were to take root, and if labour relations and corporate profitability were looking more vulnerable.