Oil prices are often volatile, but the last two years have been remarkable. In the spring of 2020, futures prices were briefly negative. Currently, they are above $100/bl (Brent), an 8-year high.  And it’s not just oil: Russian hostilities – and the response from Western countries - have invigorated many other commodity prices most obviously including European natural gas, but also wheat, metals, and fertiliser. 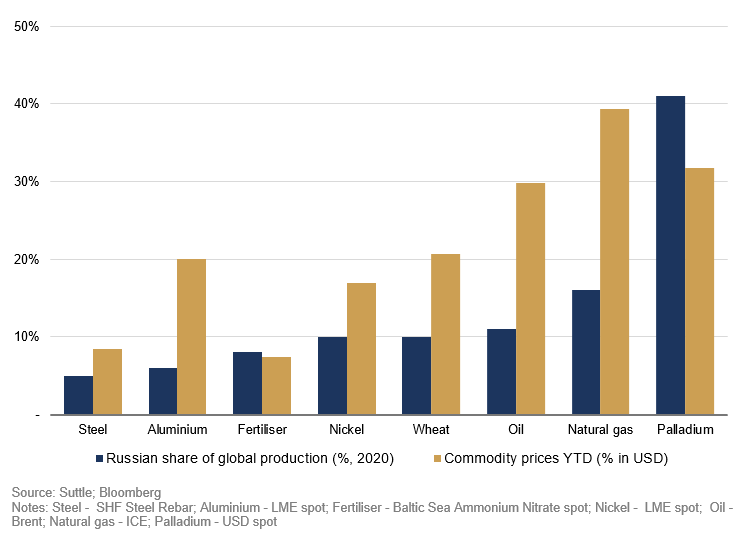 Oil is still the single largest component of global trade, a vital input to a wide variety of industrial applications, and the main transportation fuel. Moreover, its price reflects not just user supply and demand, but speculation too.  It is estimated the average barrel of oil is traded roughly ten times over in the futures market.

Supply-side changes have driven most of the dramatic moves historically – and today is no exception. A structurally undersupplied market now faces the complication of disrupted Russian supplies - the second biggest producer, accounting for 11% of global output.  Even before Russia’s invasion, oil has not been immune from the wider supply-related bottlenecks encountered by resurgent post-lockdown demand, which exceeded pre-pandemic highs. 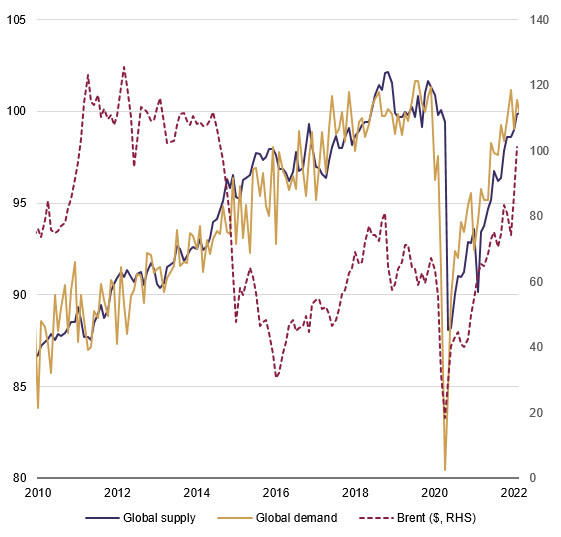 The politics of oil

The effects of an outright embargo on Russian energy exports would be uneven to say the least. Oil’s grades and characteristics vary, and it is both costly and logistically challenging to move around and store: geography matters.

If the West were to shun Russian supplies, some of them would likely be diverted East: China – the world’s largest marginal buyer of oil – would be undeterred by Western sanctions. Meanwhile, Europe would need to replace 25% of its oil and 30% of its gas supplies (with some countries far more dependent again). The suspended Nord Stream 2 pipeline had been set to further strengthen German (and European) dependency on Russian energy. As it stands, energy rationing - prioritising consumers over industry – would likely become reality once Europe’s six weeks’ worth of natural gas supplies were depleted.

Even the US, with its large domestic production and huge inventories of stockpiled crude through its Strategic Petroleum Reserve, would be exposed to rising oil prices – it is still reliant on Canadian imports, for example. The spread between international benchmark, Brent, and the US benchmark, WTI, would also continue to widen further – currently at its widest since the pandemic. More pressing though would be the impact on the rising cost of living – US gasoline prices are already at an 8-year high and climbing. The increasingly unpopular Biden administration is already considering reviewing the extent of Iranian oil sanctions.

So far, even after the weekend’s further moves, the US and Europe have refrained from tough action on Russian energy given the wider political and economic effects. The latest US sanctions announced in recent days specifically exempt all forms of energy, as well as agricultural and grain products.

That’s not to say oil prices can’t climb higher from here. Energy supplies might still be disrupted through Russian retaliation or as a direct result of the conflict: nearly 1% of global oil supplies pass through Ukraine and the Black Sea. But a repeat of 1973’s OPEC-induced squeeze, when global supply was more tightly held and prices quadrupled in a matter of months, seems unlikely.

Higher oil prices could, of course, push consumer prices higher, but their more important impact can be to transfer spending power from consumers to producers and a slowdown in growth (oil producers spend less of their income than oil users). “Stagflation” fears will resurface. That said, oil is not as important as it used to be. The energy intensity in the economy has declined sharply over the past 50 years, from 15% of the value of world GDP compared to less than 5% today. And in today’s less inflationary economies (at least, until recently…), the immediate rise in CPIs might not reverberate as widely as it used to.

We doubt that oil prices in themselves will be enough to cancel today’s economic momentum, though they will likely reduce it sufficiently to scale-back expectations of higher interest rates – particularly in the eurozone.