If the recent raft of February CPI prints are anything to go by, inflationary pressures were still building before Russia’s attack on Ukraine.

It had been widely assumed that headline inflation rates would likely peak around the turn of the year in the eurozone and the US – and somewhat belatedly in the spring for the UK (once the energy cap was lifted). The belief was that commodity base effects would start to roll over and goods pricing pressures would subside as bottlenecks eased and patterns of expenditure shifted back towards services.

As the February data suggest, this assumption of an imminent peak – like earlier similar assumptions made during 2021 – was already looking premature, even before the invasion. Now, with the Bloomberg commodity price index up a further 13% since mid-February (led by oil and natural gas), it seems clear that the peak will be even later, and higher, than previously expected. 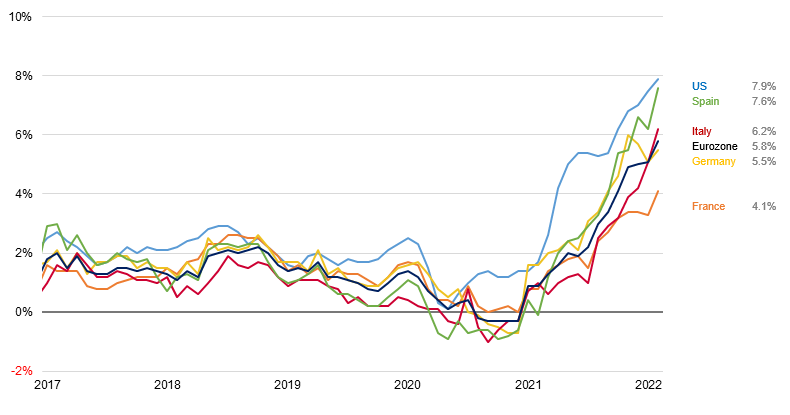 One estimate suggests that the direct arithmetic effect of today’s oil and gas prices on US and EZ consumer prices will be to add another one to two percentage points to headline US and eurozone CPIs.

Those base effects will still be making themselves felt, but the end-year inflation rates might now be close 7% and 4%, respectively, all things being equal – possibly even higher given the upward momentum in those oil prices.  These are just the direct effects.  The visible direct energy components of the CPI include categories such as liquid fuels, gas and electricity, and account for 7% of the US basket (11% in EZ and 7% in the UK).  But indirect channels also play a big part, albeit with some lag. Higher production costs affect core inflation, while the second order effects of rising inflation expectations can shape wages and the cost of capital. The thorny business of disentangling and estimating the magnitude of such forces is more art than science.

It’s clearly hard to be precise about the peak. While we don’t expect inflation to continue to accelerate once energy (and wider commodity) prices have peaked - there is still a big transitory component to this inflation surge - the likely deceleration will not be as quick as previously expected.