A big hedge fund reportedly said this week that China’s ADRs (American Depositary Receipts) have become “uninvestable”. Our tactical (shorter term) macro optimism on China has clearly been misplaced of late – MSCI China has fallen by 31% in dollar terms since February 17th, and by 12% in the last month, underperforming the local onshore market as it does so. Do we need to reconsider our strategic (longer-term) call too?

Compared to the rest of the world, valuations for the MSCI China index are low, and more so than usual. But valuations alone count for little. The Russian stock market is usually one of the cheapest, but from a top-down perspective we have always been wary there. Governance risk in particular has held us back – and this is what is reportedly rising most recently in China (the initial setback in February had reflected the latest attempt by Chinese officials to fine-tune a previously rampant market – see April 30th post).

China’s stocks are of course often volatile. This is the seventh double-digit setback (or “drawdown”) in the last decade, and (so far) just the 3rd biggest (the chart is based on monthly data). Despite some recent slowing in retail sales and industrial production, and some renewed COVID suppression, we doubt the economic outlook has worsened materially. If we were to change our tactical and strategic calls now, we could find ourselves quickly offside if those governance risks are being overstated and the market bounces. 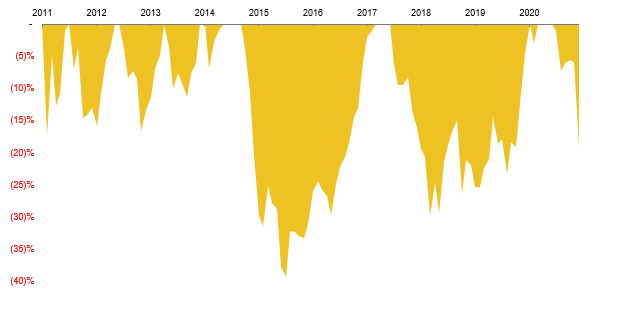 One immediate focus is the status of offshore equity-linked investments in China: ADRs, for example, and VIEs (Variable Interest Entities). These have been popular – in some cases, unavoidable – ways for foreign investors to gain exposure to China’s growth. Current investor nerves reflect two possibilities:

1. Tighter Chinese regulation. China’s economy is still largely owned and shaped by the government, and its companies and reporting are more opaque than those in developed markets: as a result, governance issues are always prominent. But prominent has not meant prohibitive, so far at least.

2.Tighter regulation by the relevant offshore authorities (mostly the US and Hong Kong – the latter still has different financial regulations and controls to mainland China, and is a developed market, not an emerging one).

Current fears of (1), a clampdown in China, reflect ongoing government concern at the growth, market power and potential hubris at some of the bigger technology companies. In this, the Chinese authorities are in good company, inasmuch as both US and European regulators have been actively seeking in the last few years to reduce their big tech names’ potential market dominance (and perceived tax avoidance) too. That said, the internet in China is of course notably less free to begin with. Then, in late July, the government let it be known that it did not see the teaching of the national curriculum as a legitimate source of profits, hitting education stocks hard.

Many of the education and (especially) technology companies have been popular with overseas investors. In this climate, with US-China trade tensions still simmering, the worries about these sectors have been extrapolated into a worry that China may try to deter foreign involvement in its markets.

Much of that involvement has been in offshore instruments – partly because in recent years foreign listings have been cheaper than those in the local (“A-share”) markets, but also because China’s government has prohibited outright ownership in some key, economically-strategic sectors such as technology and telecommunications.

That latter consideration in particular has led to the popularity of the VIEs noted above, which provide entitlement to a share of profits, but not to outright ownership of the underlying business. Not all VIEs are associated with ADRs, and vice versa, but there is a big overlap. China has tolerated them to date, but their legal status has not been rigorously tested. The current extrapolated worry sees their status being rejected by China and their value evaporating. Data are scarce, but estimates suggest perhaps $2 trillion is at stake – equivalent to around 3% of the all-countries MSCI index.

There is no indication this is what China intends to do. In recent years it has been making it easier for Chinese residents themselves to invest in offshore markets; meanwhile, many of the employees in the companies concerned are remunerated partly in such instruments. Destroying the market would thus hurt many of its own people. More relevantly, perhaps, for China to explicitly reject foreign participation in the growth of some of its national champions would be both counterproductive and provocative. As we have noted here often, the playing fields in international trade and capital markets are already tilted firmly in China’s favour, and it could hardly expect to assume what it sees as its rightful place on the global stage if it were to take such a drastic step.

In this context, the big technology and telecoms names are the most important to international investors. In contrast to the education sector, the Chinese government does not object to their underlying business activities, but indeed is keen to promote and foster their long-term growth as those national champions.

As far as (2) above is concerned, the fear of tougher regulation of VIEs in particular by the new US administration is understandable (ADRs are not confined to Chinese securities, and are more conventional equity investments). The investment risk is that the less stringent reporting and regulatory requirements that have encouraged the overseas listings of China securities are tightened up to improve local financial stability (as well as, perhaps, to remind China that the outgoing US president had a point, however badly he made it).

Many overseas investors – including some prominent UK names – were hit hard in the early ‘teens by losses at US-listed Chinese companies whose reporting was (at best) opaque. The liquidity and transparency of the stocks in the headlines today however is very different: these are genuine businesses with visible cashflow and profitability. As a result, the risk now from tougher offshore regulation feels more incremental than existential. The US administration is unlikely to act in a way that would dramatically hurt many of its own investors, whose protection under US law at least is likely greater anyway.

China’s capital controls and its protection of key sectors have always meant that access to its markets is difficult. However, major index providers such as MSCI have included foreign listings and VIEs in their universe of “investable” assets.

If they or we thought China was indeed about to reject foreign participation in the growth of its technology sector, its strategic attraction would be significantly reduced (we assume that other foreign investments in China might remain in place). But we doubt it will do so. The market’s “read across” from the education sector has been bigger than we thought, but is likely mistaken.

Tighter listing and reporting requirements for China securities in the US market are perhaps more likely, but may pose a significantly smaller investment risk.