From a peak on February 19th, the emerging Asian stock market has fallen 8% in dollars while the wider global market has risen, by 4%. What’s going on?

Some perspective helps. The disappointment follows earlier outperformance. Since end-2019, for example, the bloc remains a net outperformer (by 6% in common currency, total return terms).

The recent reversal largely reflects developments in China, which accounts for roughly two-thirds of the regional MSCI index, where the local authorities have been engaged in one of their periodic attempts to shepherd stock prices. A particularly volatile episode saw the index surge in 2014 and early 2015, before falling by two-fifths to early 2016.

Chinese officials, having reassured investors in early 2020, perhaps too successfully, were more recently warning against overconfidence, and signalling tighter controls on credit. In this they may also have been too successful. While MSCI China outperformed even the US market in 2020, it has fallen by a fifth from its February peak even as the S&P 500 has been hitting new highs – with the authorities reportedly intervening in support again after some particularly sharp sell-offs in March.

South Korea and Taiwan, which make up most of the rest of the bloc’s MSCI weight, have been performing relatively well in 2021 so far, muting China’s fall. (India, the other large-ish market in the group, has ongoing covid problems, but has not weakened as much as China. Hong Kong and Singapore are also in the geographical region of course, but are classified as developed markets.)

We have favoured emerging Asia’s stock markets, and China’s within them, despite, not because of, the Chinese authorities’ recurrent attempts at fine tuning. Even the Chinese Communist Party (CCP) cannot deliver the smooth upward progression that it perhaps imagines would best echo the steady onward march of collective prosperity. Their pursuit of a “slow bull market” is misguided, and perhaps illustrates a residual reluctance to tolerate the full range of animal spirits that characterise markets (not that Western governments have exactly been embracing market volatility of late…). Such measures can backfire.

The cyclical economic case for the region has arguably improved of late. Emerging Asia was the first to be hit by COVID-19 suppression, and (India aside) the first to rebound from it. The Organisation for Economic Co-operation and Development's (OECD) leading indicator for the big Asian economies (including Japan, whose market is developed but whose economy contributes to regional growth) continues to rebound faster than the wider world’s.

Alongside their domestic rebound, China, South Korea and Taiwan are all big exporters to the US, whose own economy has also been relatively quick to revive. Strong exports from the bloc help explain why the charts of world trade we have posted here recently have been so upbeat.

Meanwhile, stock valuations have fallen back as the bloc has underperformed since February. It is still relatively expensive compared to its own history, but less so than most of the rest of the global market – particularly if its relative profitability has yet to register the improvement in its cyclical prospects.

However, official interventions are not the only short-term headwind for the bloc. As a net commodity importer – usually an advantage – the region loses from stronger metal and energy prices.

Geopolitical stresses remain too. Biden is more diplomatic than Trump, but trade threats have not disappeared. We’ve noted here often that China is the most protected big economy, and that this has likely restrained their retaliation to Trump’s tariffs: China recognises that the west has some legitimate complaints. But President Xi increasingly seems less likely to embark on deeper, more structural reform. Meanwhile, Hong Kong’s unease has quieted, but is far from being resolved.

Perhaps most importantly, China will never drop its claim on Taiwan, and the potential for military action there is real if western governments overplay their hands. That said, this does not mean that an early or dramatic denouement is inevitable or even likely. Tensions in the region are not new. I have a book (“Dragon Strike”) which outlines fictionally a very plausible regional conflict, including an invasion of Taiwanese territory. It was published in 1997.

Perhaps more subtly, investors’ tactical focus may start to move beyond the immediate cyclical rebound, and towards the eventual fading of growth rates as base effects become tougher and a sense of “been there, done that” applies to “risk on” and “reflation” gambits. The very fact that the region has been leading the way up so far suggests that the next big story might lie elsewhere. 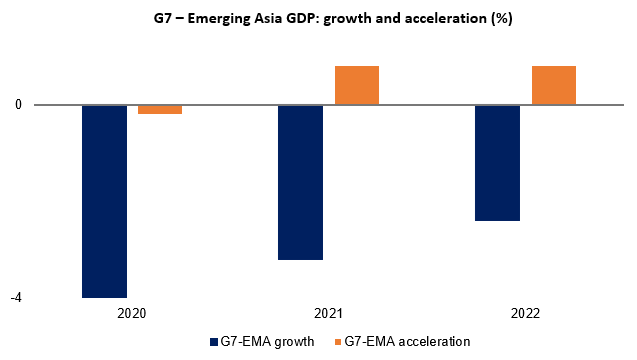 If investors focus only on growth rates, Emerging Asia looks more attractive in each year: the dark blue bars are negative. If they look instead at how growth rates are changing, the developed bloc scores highest in 2021 and 2022. The G7 bloc has less growth, but more acceleration – a lower top speed, but more torque maybe.

On a longer-term view, however, we think the investment case for emerging Asia remains compelling.

Asia will likely remain the most dynamic part of the global economy for the foreseeable future. Most of the world’s population is there, but most of the world’s economy, and particularly its capital markets, isn’t – yet.

They will be, eventually. With borders open to ideas and capital, and people’s aspirations and capabilities similar the world over, it is hard to see why the centre of gravity of the world’s GDP and market capitalisation shouldn’t continue to shift to the East.

This doesn’t require further globalisation per se, though we think that is quite likely too (up to a point: a lot of business will always have to be done locally). Generally, unless the global political pendulum swings back towards autarky and collectivism, aggregate incomes and wealth will slowly become more aligned with populations (in the process, reducing global inequalities further).

In addition, the big Asian emerging markets benefit from: relatively diversified economies; stable (if sometimes unattractive to western eyes) governments; and relatively sound finances (a lesson learned from the regional crisis in 1997: government debt is small, foreign currency reserves are high, and current accounts are often in surplus).

In theory, this straightforward story could long since have been priced-in. We think it hasn’t been – even before February 17th – perhaps because there are still some tricky long-term developments to navigate. For example, in addition to somehow resolving trade tensions and Taiwan, we have yet to see how China will manage the removal of capital controls, the inflated balance sheets of its state-owned enterprises, and the further liberalisation of its domestic economy; or how India will reform and develop its agriculture, distribution and banking sectors. There is still plenty of long-term stock market headroom here.