When UK trade data for January were released last month, showing a 42% fall in the value of visible (that is, goods) exports to the EU (in sterling), supporters of Project Fear pounced on the data as confirming a drastic Brexit impact. They'd told us so.

A big bounce was always likely. The New Year coincided not just with Brexit-related frictions and administrative uncertainties at the ports, but with the onset of another significant covid lockdown (and, for a short while, the complete closure of the border with France when the "British variant" of the virus emerged).

Exports to the EU in February were still down on December's level (the February rebound was a bigger proportion of a smaller starting point), but by a rather less dramatic net 15%. A further rebound in future months is likely as traders and customs officials settle into the new procedures, and as lockdowns ease.

If we look at the last five years as a whole, the value of UK exports to the EU has been remarkably stable.

The resumed upward trend after the referendum in 2016 (chart) is likely overstating the case: it is probably a translation effect, reflecting sterling's weakness since mid-2016. But in euro terms – many UK exports will be priced for European markets – the entire profile from 2011 to early 2020 is still no worse than flat. 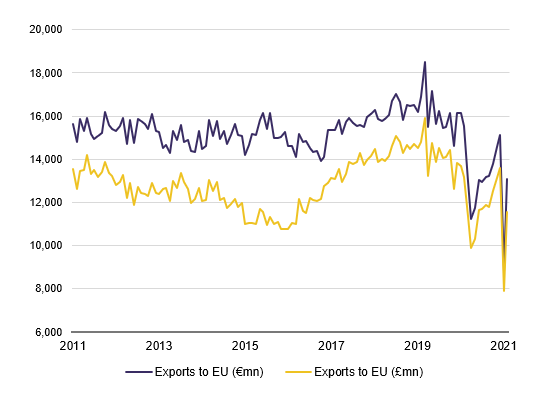 Indeed, with the possible exception of an inventory-related spike in early 2019 (the first fears of a "hard" exit), the most striking volatility in exports – in 2020 – was associated with lockdowns, not Brexit.

Visible imports from the EU have tended to exhibit more of a rising trend in recent years (in both sterling and euro terms), but with (even) greater lockdown-related volatility. Most recently they fell by 30% in January and bounced by only 8% in February. But as with exports, there will likely be a further rebound ahead.

Of course, a flat trend in UK exports to the EU is nothing to write home about, though it may reflect sluggish eurozone demand as much as poor UK performance. Trade in services may yet tell a more dramatic story. But we suspect Project Fear overdid it. Despite the undoubted difficulties recently facing many individual exporters, the main costs of leaving the EU are likely to be foregone opportunities, not dramatic falls in trade.