Joseph Schumpeter, the famed Austrian economist, described the constant flux of economic influence and the relentless cycle of innovation as ‘creative destruction’. Shifting trends and new habits elevate innovators and leave slow adopters in terminal decline - a process perpetually in motion. Though often gradual in nature, extending over decades, economic crises and market dislocations can accelerate such trends.

Today is no exception: the viability of many companies and whole sectors – from energy to traditional retail - is being called into question.

Yet, so far, relatively few businesses have succumbed to the suffocating effect of lockdowns – albeit somewhat unevenly. Last year, European businesses reported fewer bankruptcies than in any year since 2015 – even the US was below 2019’s rate of bankruptcy filings. The actions of fiscal and monetary policymakers are obvious reasons for this – generous labour market support and abundant corporate liquidity have prevented a more serious reckoning. Vulnerable families had to be protected.

Is this a temporary interruption of the cycle of corporate decay and rebirth, perhaps to the detriment of long-term economic growth and efficiency? Or are we perhaps entering a new era of ‘big state’ and enhanced corporate responsibility?

Milton Friedman said that “the social responsibility of business is to increase profits”. He was not making a moral comment. Rather his point was that businesses are there to do one thing and governments another, and that blurring the lines can be inefficient, making us collectively worse off.

The US has always embraced a more undiluted form of capitalism than its European peers. A mix of flexible labour markets, accommodating bankruptcy law and a more conventionally laissez-faire form of capitalism all contribute to the US’ global investment appeal. Last year the US ranked 6th globally on the ‘Ease of Doing Business’ index. None of Europe’s large economies featured in the top 20.

Coincidentally or by design, the US also had structurally faster growth and lower unemployment over the past few decades – an experience echoed by the events of the past year. Today, US unemployment stands at 6.2% - having more than halved since last spring – and is now far below European levels which have been edging higher, not lower.

The irony is that despite its more diluted capitalism, Europe has fared worse than the US, economically, in the last year: output contracted more sharply than the US and the road to recovery may take twice as long. This most recent divergence is largely a function of Europe’s tougher covid restrictions – but it is the US whose budget deficit has risen furthest in response to the crisis.

There has been some evidence of Europe’s traditional interventionism. While the US simply sought to directly compensate workers laid off from their jobs during the crisis with higher unemployment pay and household cheques, the ‘German way’ - retaining workers on payroll and compensating employers through job retention schemes – was intended to protect jobs and productive capacity. In theory this should enable businesses to bring operations back online, without disruption. 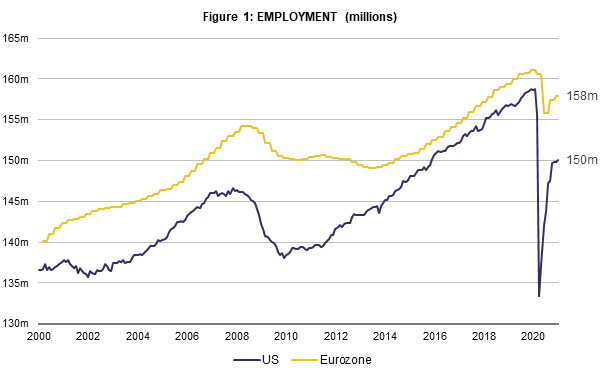 The jury is still out on which has been more successful – the labour market remains in a covid-induced stasis and employment in both regions remains way below pre-crisis levels. US unemployment may be lower, but this partly reflects people leaving the workforce: employment has been more stable in Europe (see Figure 1). But the bloc’s decision to try to directly protect jobs rather than people may yet have lasting consequences for productivity. Meanwhile, as an earlier blog post note, there are signs that US productivity is currently enjoying a remarkable surge.

Once the dust has settled, it is possible that European unemployment will continue to grind higher as furlough schemes are eventually retired, though we think there will be enough economic momentum to avoid this – but perhaps at the expense of productivity.

At a big picture level, the divergence between US and European forms of capitalism may be about to diminish. Whereas in recent decades the commonly held view was that European capitalism would align more closely with that of the US, this may no longer be the case.

Increasingly, a social (and environmental) agenda is permeating political and even corporate discourse. Governments are emphasising the need for a more ethical form of capitalism, and not just in Europe. Ahead of the election, President Biden suggested that shareholder capitalism is a ‘farce’; many of his new policy proposals – though less dramatic than Bernie Sanders’ brand of socialism - hint at such a shift. Corporate executives – from Jamie Dimon (JP Morgan) to Marc Benioff (Salesforce) are also refining their mission statements to focus beyond the bottom line – more inclusive and holistic measures of success are now being incorporated.

As noted, in reality it is the US, not Europe, which has spent more through this crisis - and also in recent decades, having failed to run a balanced budget since the Clinton Administration. Ahead, President Biden’s ambitious policies suggest the fiscal taps are unlikely to be turned off anytime soon.

More broadly, and back to our original concern, we wonder whether the virus responses on both sides of the Atlantic mean that widespread business failures may be avoided altogether. Re-opening lies ahead, and with it, a return to growth. Markets are certainly upbeat about the prospects for the global economy – even those troubled sectors are now moving back towards pre-crisis levels (in terms of stock prices). But perhaps the avoidance of crisis – particularly one like this, as opposed to a conventional economic downturn – can breed innovation too. The ongoing adoption of new digital technologies may have a more profound impact on business models and productivity than has yet been apparent.