From research labs to living rooms

Some of the world's first electronic games date back to the 1950s and the brains behind them were scientists, not game developers. In 1952, Professor A.S. Douglas created OXO, a game of noughts and crosses during his time at the University of Cambridge. In 1958, William Higinbotham created Tennis for two on a large analogue computer connected to an oscilloscope display. 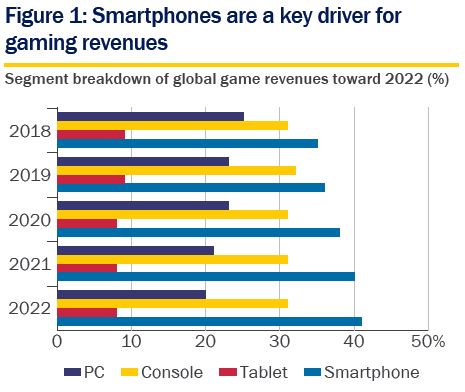 Today's video games are inevitably more technologically advanced but the main concept remains the same. We define video gaming (gaming) as actively engaging in a game using a console, a PC, a smartphone or any other type of electronic device (see split in figure 1). This plethora of gaming platforms appeals to various demographics. However, core users are from younger generations. More than 60% of video game players are below the age of 35, and have still to see their income and discretionary spending peak. 18% of players are between 36 to 49 years, while one in five of all video game players are over 50 years old, illustrating the demographic diversity within gaming.

The video game market has grown both in size and importance over the last few years. The global number of players is expected to reach 2.6 billion in 2020, with revenues set to top $160 billion, led regionally by Asia-Pacific and North America (see figure 2). 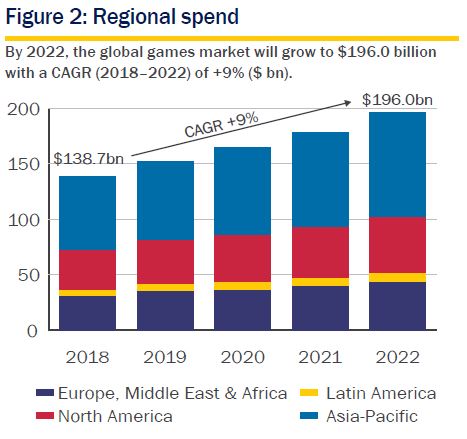 eSports, a subsector within gaming, are organized video gaming competitions followed by millions of fans through broadcasts (on TV or online) where players compete in household games. This is another interactive channel which has helped to shed further light on the gaming market, and its popularity has grown rapidly.

By 2023, the eSport audience is expected to reach 650 million, an increase of almost 65% compared to 2018. Specific to 2020, these virtual sporting competitions have acted as substitutes for several popular sporting events that have been cancelled or postponed due to the Covid-19 pandemic. As we write, Formula 1 has announced a F1 eSports Virtual Grand Prix series, featuring F1 drivers, to replace postponed races due to the pandemic.

The inherent power of a smartphone

In addition to PCs and consoles, the most widely owned electronic device that has granted access to gaming, anywhere and at any time, is the smartphone. As the number of devices sold continues to grow, so does the number of potential mobile players. Having grown +9% over the past year, the number of smartphones reached 3.5 billion as of April 2020. With over 50% of global population still without a smartphone, there is further room to grow. Mobile gaming revenues and growth driven by smartphones is expected to have a CAGR of almost 13% between 2018 and 2022.7

Companies in several sectors are set to benefit from growth in global gaming, both directly and indirectly. Directly exposed are video game publishers and console producers. At the opposite end of the spectrum, hardware suppliers providing equipment for gaming and companies focusing on distribution - as opposed to development - are also set to benefit.

With more options to choose from, gamers are able to upgrade their gaming equipment to match the experience they seek. As players become more sophisticated, graphic card producers aiming to optimize the gaming experience are also well positioned for growth in the sector.

In the past, video game spending mainly occurred as a consumer bought a game or a new device. This has shifted, as many games are now free-to-play with in-game purchases, while devices can be modified or upgraded to best suit the player. Some of the largest games by revenue, such as Fortnite and Dota 2, are free-to-play, and financed through in-game purchases. Reflecting the scalability of this model, Fortnite reached revenues of $1.8 billion in 2019.

Approaching the next level

With significant increases in gaming usage since the start of the Covid-19 lockdown, the gaming industry is strategically placed to withstand the latest pandemic, with revenues expected to reach roughly $200 billion by 2022.10

At the right time, this sector can provide ample opportunities for investors looking to get exposure to companies which will profit from a fast-growing gaming market, buoyed by youthful demographics and near-universal access.