Equity markets continued to rally in March, despite a brief setback during the month driven by weaker than expected global data and a temporary inversion of the 10y-3m US treasury curve, resurrecting fears of a US recession. The US 10y yield fell back to a 15-month low and the 10y German bund turned negative for the first time since 2016. Meanwhile, geopolitical tensions - Brexit notwithstanding - seemed to recede, with the US and China reportedly closer to a trade resolution.

US retail sales and consumer confidence staged a strong rebound in the latest month. The pace of job creation in February looked erratically weak, but the unemployment rate fell back to 3.8% - a 50-year low - and wage growth moved to a cycle high of 3.4% (y-o-y). The Fed nonetheless reiterated its neutral policy stance, 'officially' pushing back the two rate hikes expected for this year and confirming that the reduction of its balance sheet ('QT') will conclude in September. The much-anticipated Mueller report revealed that there was no collusion between Trump and Russia during the 2016 election but fell short of exonerating the President. An increasingly divided Democrat party - with perhaps a dozen contenders for the 2020 race - seems unlikely to take up the mantle of impeachment.

European manufacturing remained weak in March as PMIs in France (49.7) and Germany (44.1) took another leg down. Two highly cyclical sectors - capital goods and autos - are suffering most from the fallout of protectionism and Brexit deadlock. Other indicators, such as Germany's IFO survey (99.6) posted a small bounce recently, while unemployment rates (4.9% in Germany) continue to fall. Mario Draghi sounded increasingly dovish as the ECB pushed back its first rate rise beyond 2019 and lowered its growth outlook this year to 1.1% (previously 1.7%). In the UK, PM May's efforts - and willingness to resign as PM if her “meaningful vote” passes - have been hindered again by an indecisive Parliament. Agreeing on a much longer extension or revoking Article 50 are increasingly possible outcomes.

China's economic soft landing may have started to stabilise, with retail sales and fixed asset investment - the first official data since the Chinese New Year - appearing to have turned a corner, supported by fiscal easing. Industrial production growth (5.3% y-o-y) continues to slow, but appears relatively resilient by the standards of disappointments in other economies. Further tax cuts due on 1st April, and monetary loosening, may limit further weakness. Japan's quarterly Tankan survey was disappointing. Both current manufacturing conditions and the outlook showed a sharp deterioration, driven mostly by slowdown in external demand. In contrast, the service sector seems to be in much better health. 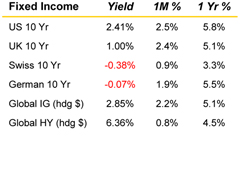 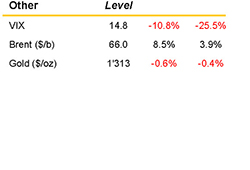 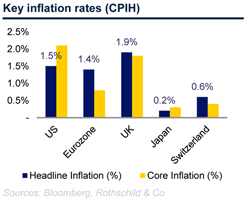