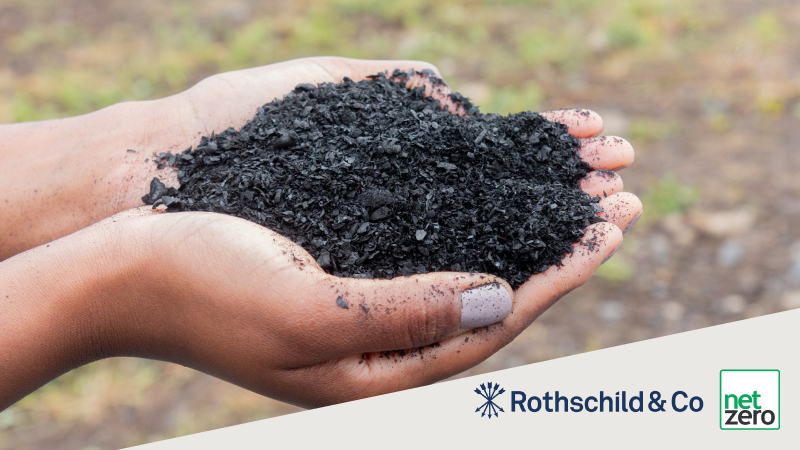 NetZero aims to deploy large scale biochar production in tropical areas to remove atmospheric carbon for hundreds of years. Biochar is recognised by the IPCC as a viable climate solution with global removal potential of 1–2 billion tonnes of CO2 per year. The carbon contained in plant residues, initially captured in the atmosphere through photosynthesis, is extracted using a pyrolysis process. The resulting solid product, called biochar, is a very stable form of carbon with charcoal-shred appearance, that is mixed with topsoil to ensure long-term carbon storage, thus achieving long-term carbon removal from the atmosphere.

In addition, NetZero’s model brings numerous co-benefits by leveraging the production and use of biochar in the tropics. Biochar is a powerful agronomic solution acting as soil amendment that durably reduces the need for fertilisers while improving crop productivity. It also enables the production and local distribution of renewable electricity from the excess energy of the pyrolysis process, which enhances access to clean energy in rural areas.

The agreement follows NetZero’s recognition as one of the world’s most promising carbon removal projects in the renown XPRIZE competition, the award of the Solar Impulse Foundation’s label, and news that the credits have been certified by the Puro Standard, a reference certification standard for long-term carbon removal.

Rothschild & Co’s ambition is to continue its efforts to reduce its operational GHG emissions as far as possible, and to effectively remove an equivalent amount of CO2 for all residual, unavoidable operational GHG emissions by 2030 with the help of high-quality long-term carbon removal solutions. This credit procurement agreement forms part of the Group’s balanced portfolio approach to carbon compensation, and Rothschild & Co has committed to purchasing biochar carbon credits from NetZero every year until 2030.

Anne Imbach, Group Head of Sustainability at Rothschild & Co, said: “This multi-year partnership with NetZero presents an exciting opportunity to contribute to the development of impactful and scalable carbon removal solutions that bring strong co-benefits to the environment and local communities.”

Axel Reinaud, Co-founder & CEO of NetZero, said: “This multi-year procurement partnership with a globally respected client such as Rothschild & Co confirms the validity and relevance of our pioneering model, and sends a strong demand signal for high-quality carbon removal solutions that will help support NetZero’s scaling efforts in the years to come.”