With all of the noise emanating from the US - trade wars, shutdowns - one issue that seems to have more quietly crept up on us is the ever widening US budget deficit. The US Congressional Budget Office (CBO) - the fiscal watchdog akin to the UK's OBR - provides economic forecasts to Congress. The CBO recently released their latest fiscal forecasts for the years ahead, which seemingly paint a fairly stark picture of US public finances.

They suggest that the budget deficit is poised to grow to $900bn in 2019 ($779bn in 2018) and then exceed $1tn for the subsequent 3 years. To put this in context, over the next 10 years the deficit is forecast to average 4.4% of GDP - comparable to the average deficit that occurred in WWII, and firmly above the average 2.9% budget deficit over the past 50 years:

The CBO projections make a number of assumptions about the likely path of economic growth, tax revenue and spending over the next 10 years. The CBO's average growth estimate of 1.7% seems plausible given the US economy's post-GFC (2010-2018) trend rate of growth has been 2.3%. Both spending and tax revenue are expected to rise relative to GDP, but at different rates, resulting in a widening deficit over time. As a result, by 2029 the debt interest bill will nearly double to 14% of government spending.

A significant boost to tax revenues - independently of economic growth -  will come in 2025, when a number of income tax cuts passed in the TCJA 2017 expire - so-called 'sunset clauses'. Higher income tax receipts will provide a much needed boost to government coffers, but will be insufficient to offset the higher forecast discretionary spending related to social security and Medicare (see below for a summary of projected changes in government expenditures). The sunset clauses represent a reversal of the more progressive (that is, redistributive) tax measures that were implemented last year, such as reinstating lower statutory income tax bands. 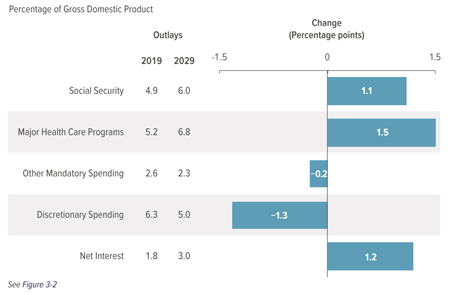 There are two key aspects to address the question of too much debt - can the US honour its debt obligations and does this impact the sustainable trend rate of growth?

We are not fans of US Treasuries to begin with, and the rising deficit is not our main reason (they simply look too expensive for the current economic climate), though it does nothing to make them more attractive.

US fiscal credibility could actually be quickly restored by raising taxes or rolling-back a number of the corporate tax cuts. The US' tax-to-GDP ratio was 27% in 2017 (likely lower now) versus the OECD average of 34%, suggesting significant scope to raise further revenue while remaining a relatively low-tax economy.  Of course, this would require less dysfunctional US government and politics, and we would not hold our breath.