Strategy blog: The end of TINA?

Bond market volatility has been nothing less than extraordinary this year.

It is the worst calendar year return (so far) for bonds in the past four decades at least (possibly since the 1970s, if we use a longer-term but patchier US dataset) and implied treasury volatility is extremely elevated – the MOVE index is hovering close to its highest ever level. It has been particularly painful for owners of longer dated bonds, where prices are most sensitive to changes in yields. 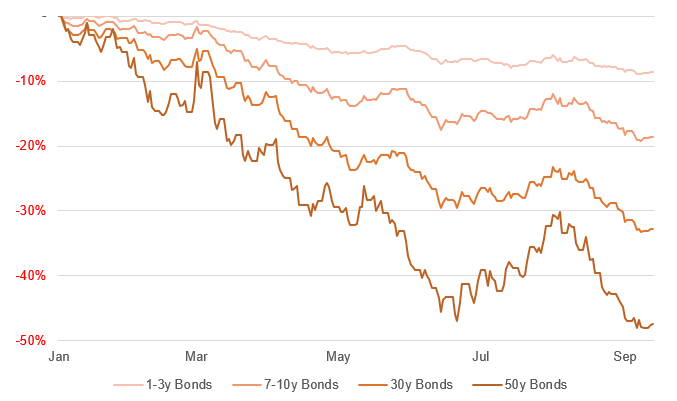 Yet, amidst all this turmoil, some value may finally be re-emerging in the high-quality government bonds that comprise the core of the global market. It may finally be time to retire the acronym TINA (‘There is No Alternative’).

The benchmark 10-year US treasury is yielding close to 3.4% - closing in on its recent cyclical high in June - while shorter-dated 2-year bonds, which are most exposed to the machinations of central bank policy, are even higher, at 3.7% (the highest since 2007). Longer dated UK gilt yields are not far behind (3.1% at the 10-year tenor), and even in Europe, yields are edging higher. Readers may recall that it wasn’t long ago that the entirety of the German yield curve was negative, but it is now firmly back in positive territory (in 2019, one third of outstanding global bonds were offering negative yields to maturity – that proportion is below 5% today).

Decomposing the move in 10-year bond yields, this year’s sell-off is actually not primarily driven by expectations of inflation – these have retreated in the US and only moved modestly higher in the UK and somewhat more in the eurozone – but instead mostly reflects rising real yields.

In the US, the 10-year TIPS (or ‘real’) yield has moved from -1.1% at the start of year to +1.0%, today. Even in the UK, where the link to RPI rather than CPI inflation and the greater emphasis on liability-driven investing, push quoted real yields down, the 10-year index linked gilt (real) yield, at -1.0%, is still significantly higher than in January (and the highest level since 2016).

Of course, in a longer-term context, even the US real yield of ~1.0% is still relatively low: the average month-end real yield (seen on 10-year TIPS) over the past 20 years is 1.7%.

Historically, the most useful rule of thumb we’ve found for gauging “fair value” for rates and yields compares them with GDP growth, either in real or nominal terms. Taking the last sixty years or so, nominal growth has been a remarkably good approximation to rates and yields, with average long-term bond yields in both the US and UK diverging by less than percentage point or so from trend nominal GDP.

For much of the latest decade, rates and yields have been below trend nominal GDP growth – the relationship weakened by financial repression and unorthodox monetary policy. But with policy normalising and bloated central bank balance sheet slowly unwinding (at least in the US and UK), that long-term rule of thumb driven by trend growth may once again be a good a guide to likely fair value.

Today, trend nominal GDP (defined as a 10-year backward-looking moving average) is close to 4.3% in the US, 3.5% in the UK and 3.0% in the euro area. This might suggest we are not far away from fair value in the UK and approaching it in the US and eurozone (10-year yields in the wider bloc, as opposed to Germany alone, are at 2.6%). But with risk appetite still fragile, and inflationary pressures still evident it would be premature to conclude that today’s longer-dated yields are yet at compelling levels. And those trend growth rates of course do not yet reflect the higher inflation trends we expect in future. Much depends on our assumptions about nominal GDP growth and the relative hawkishness of central bankers – who seem (finally) determined to reassert monetary credibility.

For now, while government bond valuations are less stretched, only the US segment looks likely to deliver long-term returns noticeably in excess of market expectations of inflation – which at 2.4% are a bit lower than ours (circa 3%, the midpoint of our suggested range of 2-4%).