Q1. Ezra, you have been working in the Emerging Market (EM) Asia investing space for many years. How has the region changed since you started and where do you see the biggest investment potential?

Since I started investing in the region 27 years ago, it has changed significantly.  At that time, the biggest markets in EM Asia (see the R&Co article on EM Asia) were Thailand, Malaysia, Indonesia, Taiwan and Korea. Nowadays, India and China are the dominant countries and especially the latter has grown significantly. To give you an example: In 2000, GDP in China per capita was USD 1,000 while in 2022 it will be USD 12,000. India has not grown at the same scale as China but since the 1991 Indian financial crisis, the country has adopted a free-market approach. If it carries on with pro-business reforms, it could develop extremely well over the next 10 to 20 years and possibly replicate what China has achieved over the last 20 years.

Q2. What is the biggest difference today between India and China in terms of the investment landscape?

We have always classified India as an underinvested economy because investment there has been slow, largely due to low local saving rates. There are also high barriers to entry for foreign capital inflows. This is a relic from India's colonial past which makes the country - until this day - very wary of foreign capital moving into the country and overprotective of its domestic market. On the other hand, incumbent companies have been able to be much more profitable because there is limited competition and high barriers to entry due to the elevated cost of capital. China is the opposite since Chinese companies always had to expand due to strong competition. Also, access to capital is relatively easy with high local saving rates and strong foreign capital inflows.

Q3. What's your view on the shape of the Asian consumer broadly speaking across the countries you cover?

The number of Asian consumers and more specifically of Asian middle-class consumers, continues to grow (Chart 1).  In the past they spent most of their money on basic goods such as TVs, cars and fridges. These days, they spend their money on items that enhance their quality of life and general well-being such as entertainment, hospitality, travel (both nationally and internationally) as well as sports. Especially the last two sectors are interesting investment cases since people have started to adopt a more Western lifestyle. As a result, obesity and other "affluent" diseases are increasing and consequently, spending on sport is rising. When it comes to travel, we have all witnessed the wave of Chinese tourists in the past. In the next 5 years, I would expect the same wave coming from Indian tourists. Investing in companies that provide products and services that meet consumer demands and lifestyle spending is therefore a priority for us.

Chart 1: The consumer class is shifting East – the next decade will be South Asia's 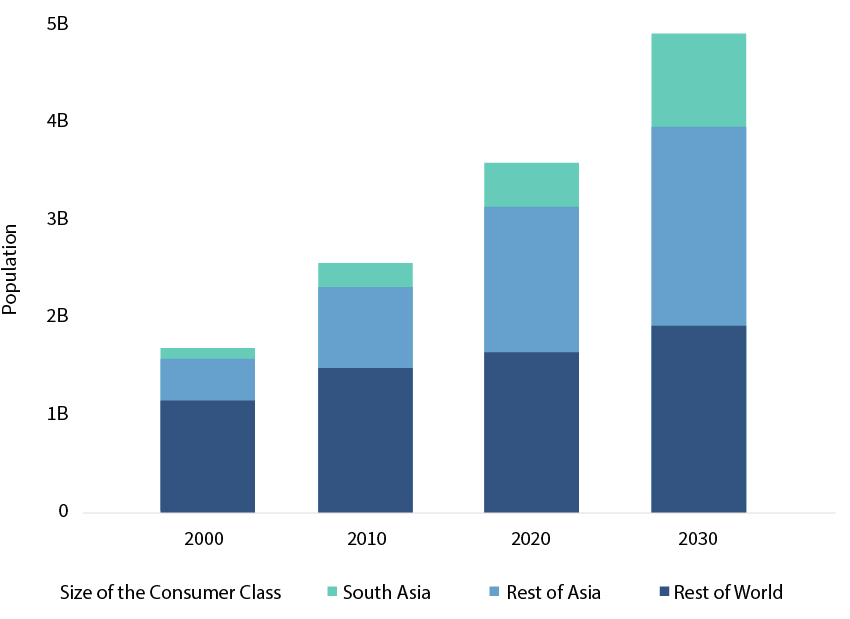 Q4. The fund's strategy is focused on EM Asia where China is the dominating country. How have recent regulatory, cyclical, geopolitical and Covid-19 contagion issues affected the fund?

China is in a difficult situation. First, its growth has reached a level from where further growth is challenging. Second, on the back of the global policy stance, globalization seems to be reversing. It has never been sustainable for China to have built its business model around consumers outside of China, because to progress, you cannot always rely on oversea consumers. Furthermore, due to its previous draconian one child policy, China's population is ageing rapidly. Therefore, China finds itself at an important juncture that might mark the beginning of its economic slowdown. To put this into perspective: In the past, China's GDP grew 7-10% per annum. This has now been reduced to 5-6% p.a. and we are predicting between 3-4% p.a. by the end of the decade. This slowdown may happen faster than people initially thought. However, as an investor, you have to rely on forecasts. The growth adjustment from 5-6% p.a. to 3-4% p.a. may impact investment decisions which could then ultimately result in an accelerated economic slowdown. Personally, I still see a lot of strength in certain areas of the economy. Especially the decarbonization effort will be a strong driver for further growth in China since a lot of the world leaders in their respective area of renewable energy are Chinese companies.

Q5. And how about the real estate situation in China - do you see a risk of escalation there?

We have said consistently that China's real estate prices are too high and that the household debt level is rising too quickly. As a consequence, we haven't invested in this segment for the last 7 to 8 years. President Xi has always been very mindful that this could potentially cause a systemic risk to the financial system. Since he came to power 9 years ago, he has therefore tried to defuse this time bomb. To some extent he has been successful, but the bubble is still huge and will take years to unwind. Fortunately, the sector has been consolidating into the hands of state-owned enterprises which have lower funding costs and better access to liquidity. The "contagion risk" for the rest of the economy is limited but it will cause some issues since the majority of Chinese wealth is held in properties. When property prices fall, Chinese people will spend less. As mentioned previously: China is facing many macroeconomic issues, but we don’t invest in the Chinese economy, we invest in individual Chinese companies that we think can deliver long-term growth because they benefit from a structural tailwind.  Going forward, we are confident that our professional expertise will enable us to identify the areas that will continue to grow strongly and pick the right companies despite the general weaker economic outlook.

Q6. What is your view on the potential risk of a Taiwan escalation?

I consider the escalation risk highly unlikely because China cannot challenge the US from a military point of view: it lacks the appropriate equipment as the US spends at least 3 times more on defence than China does. President Biden has stated that the US will defend Taiwan if needed. I therefore see Taiwan more as a button that the US will keep on pushing just to see where the Chinese boundaries are. At the same time, it enables the US to cast a bad light on China in the global perception.

The regulatory situation is driven by common prosperity.

Especially income equality (Chart 2) is an issue, not only in China but worldwide. In China the gap between rich and poor people has widened massively: Whereas the average yearly urban income is USD 47,000, the rural average is only USD 18,000. The Chinese government is now seeking to close that gap and wealth distributed more fairly. 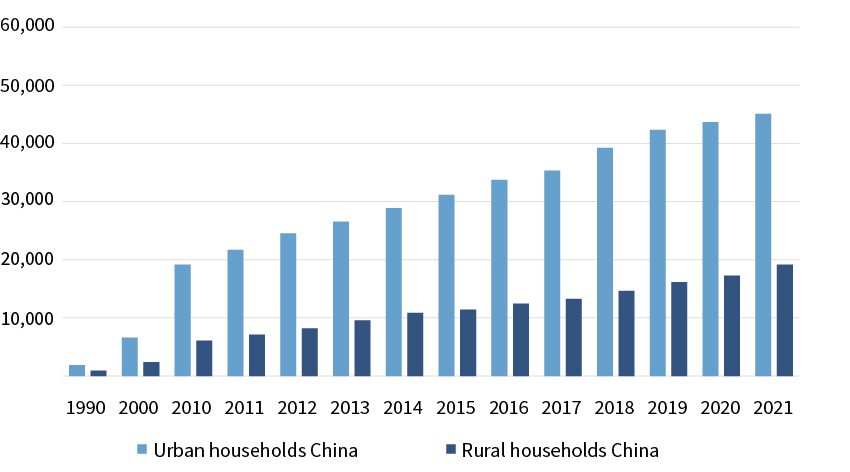 To achieve that, the Chinese government has committed to raise the incomes of low-income groups, promote fairness, reasonably regulate excessively high incomes and encourage high-income people as well as enterprises to give back more to society. As threatening as common prosperity may sound - it is to some extent driven by social justice and if executed well, could benefit the whole society. However, characteristically for the Chinese way of implementing reforms, it has been executed heavy-handedly and not communicated properly. It is therefore understandable why the plan has been perceived so badly in the media.  In the end it is about striking the right balance and communicating it well.

Q8. What do you think about the US delisting of Chinese companies?

We have always said that Chinese companies will eventually be delisted from US stock exchanges for political reasons and as part of the "financial" war which is going on between the US and China. However, this will not be the end of these businesses. Yes, some investors will sell these stocks but the companies will be relisted, likely in Hong Kong where domestic investors will be able to invest in companies such as Alibaba and Pinduoduo. These investors will be more natural owners of companies whose products and services have been part of their lives for a long time. So longer term, this is not such a bad development for the companies.

Q9. What opportunities do you see at the moment?

For the next 5 to 10 years, I see the focus on new energy solutions companies, companies producing or helping produce electric vehicles, batteries, solar power, wind power etc. (Chart 3) and the supply chain into these industries. Especially investments into solar power, where China has a 75% market share, are going to rise globally. We see a lot of potential here, given the fact that energy security has risen up political agendas globally. This is driving investment in areas such as solar, where China has some of the world leaders in solar technology and its supply chain. 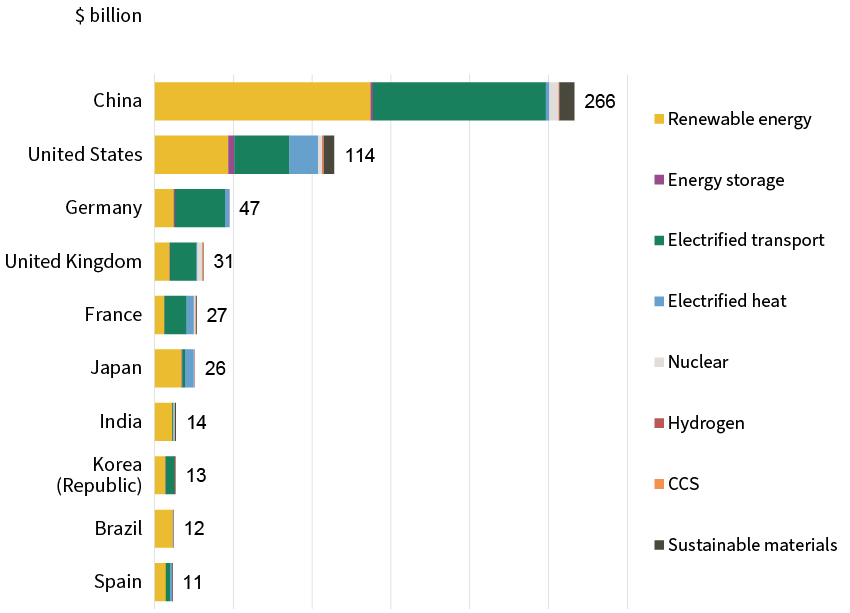 Q10. What would our readers be surprised to learn about China and where do you see the country heading?

I am not a defender of the Chinese government, but I observe that the general media coverage of China is rather negative and lacks objectivity. To gain a balanced understanding of China, one must research well and think critically. One way to do this is to get to know Chinese companies, and I am in the privileged position of dealing with them on a daily basis. We continue to believe that Chinese growth will continue after the Covid lockdowns: Restrictions are easing and once fully removed, the economy could bounce back quite strongly. Overall, there seems to be general pessimism when it comes to China. What I have learnt in the course of my 27-year career is that when pessimism is taken to the extreme, the opportunity to generate substantial returns can present itself for long term investors. This is because quality companies become mispriced as their share price becomes overwhelmed by negative sentiment which isn’t looking at the fundamentals of how the company is performing operationally and its future prospects. China is not as bad as a lot of the media make it out to be.

Send us an e-mail